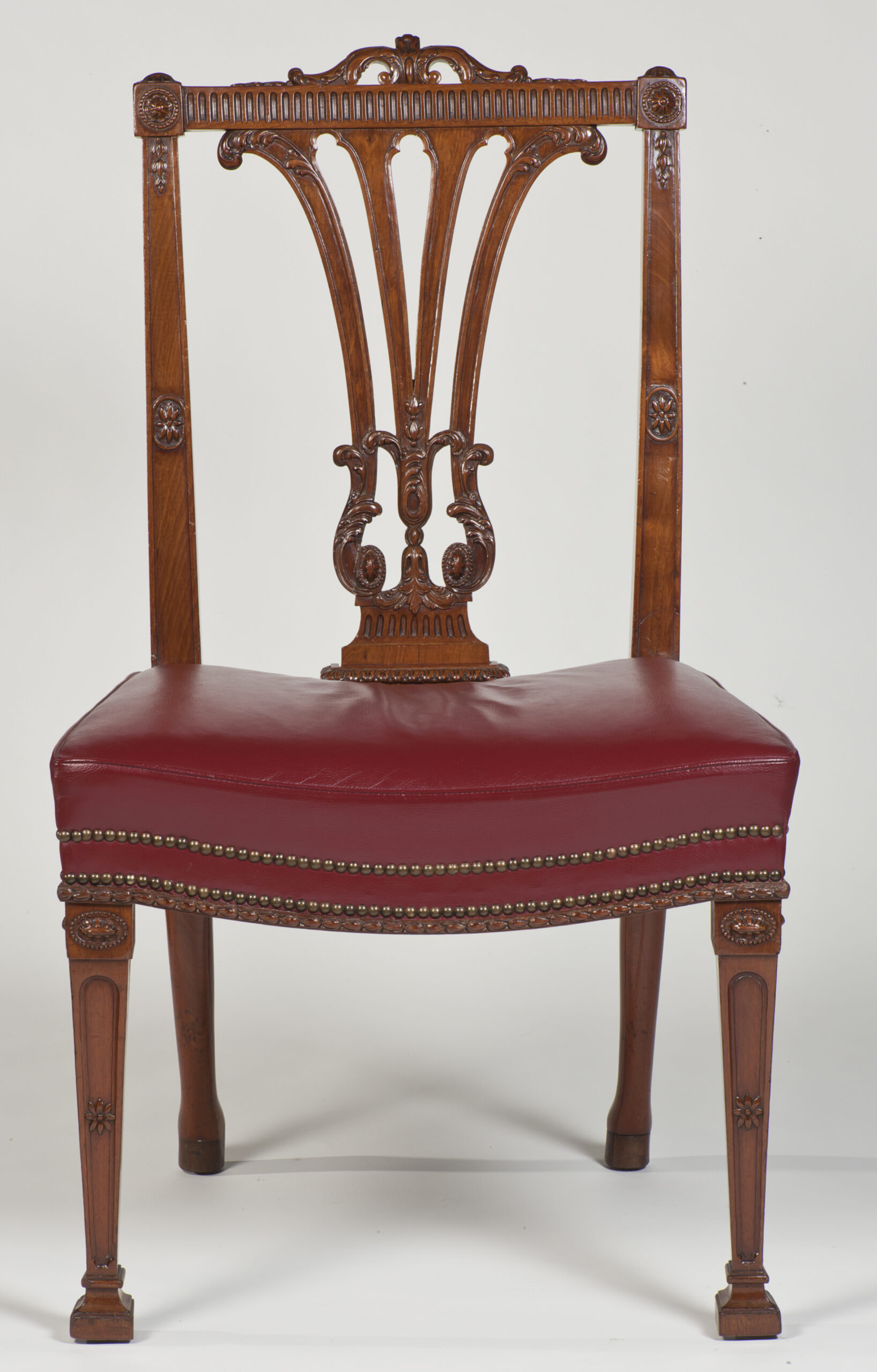 Orpheus – the story of a statue As May is Share-a-Story month, here’s a story about one of the most photographed sculptures at Harewood, Orpheus, the magnificent bronze sculpture by German-born British artist Astrid Zydower, installed on the Terrace at Harewood in 1985.

Inspired by the figure from classical mythology, his story is one of both enchantment and tragedy.

According to legend, Orpheus was the son of Calliope, the muse of epic poetry. He perfected the art of music, taught how to play the lyre by Apollo and known for his love for his wife Eurydice and his journey to the underworld to rescue her from death. He is said to have used his musical prowess to persuade Hades to release Eurydice, granted only on the condition that Orpheus walk out of the underworld without looking back. Emerging from the kingdom of the dead, Orpheus turned back to check on his wife, only to see Eurydice vanish before him.

Today, Orpheus stands on the former site of a large Victorian fountain installed by the architect Sir Charles Barry as part of the original design of the Terrace. The fountain was lost in 1976 due to frost damage, and it was up to the 7th Earl and Countess to decide how to replace it:

“When our Victorian fountain fell down, literally overnight, we thought at once of Astrid and spent many hours discussing with her and with Dicky [Richard Buckle] what we should put in its place. We wanted a musical subject, we thought, but it was not easy to think of the right one…we saw her maquette for the figure she was making for Lincoln Kirstein and realised that this was exactly right. We wrote to Lincoln to ask his permission and received an enthusiastic “Yes!”.

On 14 May 1985 Orpheus took his place on the Terrace at Harewood where he was unveiled by actress and friend of the 7th Earl and Countess of Harewood, Penelope Keith.

Harewood’s Orpheus plays homage to his character’s musical talents, seen with a tamed leopard resting on his outstretched arms. Rather poetically, Orpheus also looks out onto a landscape designed by ‘Capability’ Brown, who literally moved rocks, rivers and trees to create it. Today, Orpheus provides an impressive focal point for visitors who enjoy the stunning vista from the Library in the House across the Terrace. He is not only a reflection of the personal interests and musical knowledge and skill of the 7th Earl and Countess – a sophisticated statement about the individuals who once lived here – but also a 20th century nod towards the neo-classical decoration that adorns much of the House, where the pantheon of Greco-Roman gods and goddesses oversee everything.

My Life in Books: Curator and critic Hugo Macdonald Hugo Macdonald, curator of Harewood’s inaugural Craft Biennial, Useful/Beautiful: Why Craft Matters, pulls together his Top 10 Reads and shares why they have influenced and inspired him.

1. A coffee table read you return to again and again
A Frame for Life by Ilse Crawford. A former boss, an ongoing mentor and an endless source of inspiration.

2. A book that has inspired you
Wilding by Isabella Tree. The story of how Knepp Farm in Sussex was given back to nature is gripping, powerful and uplifting.

3. A book you enjoy/have enjoyed reading to children
Anything by Roald Dahl. The humour and imagination is timeless.

4. A book that has related to your career or life path
Ways of Seeing by John Berger. This opened my eyes and my mind simultaneously.

5. A book you would take to a desert island
The World Beyond Your Head by Matthew Crawford. A handy guide to mastering your own mind. It might be helpful.

6. A book you didn’t think you would like, but it surprised you
Just Kids by Patti Smith. Every bit as good as everybody says it is (unlike Normal People).

7. A very English book / favourite book by an English author
The Death of Grass by John Christopher. A typically polite and terrifying post-war English dystopia about what happens when grass crops fail.

9. A book that in your opinion everyone should read
Modern Nature by Derek Jarman. A poetic masterpiece about the struggle of man and nature, life and death.

10. A book someone passed to you and you passed on.
Fewer Better Things by Glen Adamson. The perfect handbook for our times of underwhelming overconsumption.

Read more about the Harewood Biennial. Planning for next year’s Biennial is well under way, with more details to be released towards the end of the year.

Florence Bridgeman and snapshot photography of a Family

In my role as a curator at Harewood, I’m often asked: What is your favourite object in the collection?

This is always a really difficult question to answer as there are so many remarkable things to choose from. But a series of objects that I always really enjoy coming back to and revisiting are the photograph albums put together by Florence Bridgeman, 5th Countess of Harewood, which document life at Harewood during the late 19th and early 20th century. This was a time when ‘snapshot’ photography was just emerging, following the invention of much more portable and easy to use cameras; photographers were no longer bound by the rigidity and formality of studio portraiture, and women, in particular, seized the opportunity to photograph the world from their point of view.

Florence’s photographs capture all sorts of domestic scenes at Harewood which contrast the very formal depictions of the Lascelles family that we’re used to seeing hanging on the walls of the State Floor. Her photographs show her children – Harry, Madge and Eddy – having fun and playing games on the terrace, her dogs, skating on the lake, horse riding, picnics and trips with friends to local beauty spots, hockey and cricket matches, dressing up, bicycle rides and weekend parties.

Florence’s images were made for private consumption, produced to preserve her own personal memories. Not only do they give us a sense of what it was actually like to live at Harewood during this period, but they also capture informal and honest family moments, that, for me, tell us so much more about the personalities of the individuals involved than any commissioned portrait.

Though perhaps my favourite thing about Florence’s pictures is that they always put a smile on my face. She seems to have had a real talent for capturing playful situations – her friends and family sword fighting with sticks, switching clothes or balancing glasses of water on their heads, for example – but there are also many inadvertent shots that are entirely recognisable to modern photographers, such as the chaos of a group photograph, the blurry outline of a pet portrait, and even the photobomb. These pictures really help us relate to Florence as a photographer, but also to her family and the place they called home.

Find out more about the Collections Don’t have a garden? You can make your own miniature garden at home.

Princess Mary was a keen gardener and enjoyed maintaining and developing her own areas of the gardens at Harewood, in particularly the Himalayan Garden and her beloved rockery.

Her love for gardens was such that she built up a small collection of miniature flower ornaments. Some of these are made by Beatrice Hindley, a miniaturist in the 1920s who was commissioned to make all the plants for Queen Mary’s Dolls House at Windsor Castle. It is quite likely that some of Princess Mary’s models were originally made for this purpose. Hindley’s models are remarkably lifelike and delicate, having spent time experimenting with different metal alloys and surface paints, as well as studying real plant specimens at Kew. There is a small display in Princess Mary’s Garden Room Below Stairs at Harewood.

To bring National Gardening Week to life, Technician Roger Stark created a version of a bowl garden (top) and an activity with his daughter.

Watch this short ‘How to’ video.