Tales from The Tempest 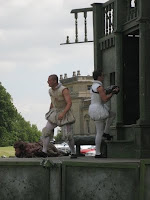 A review by Antonia Pudney, work experience student at Harewood House this week…

A tale of love, betrayal and forgiveness performed by ‘Lord Chamberlains Men’ took centre stage on Harewood’s North Front. With minimalistic staging and few props the actors themselves were the ones that brought Shakespeare’s ‘Tempest’ to life.

An audience ranging from ages four to sixty four enjoyed an afternoon of open air theatre thanks to ‘Lord Chamberlains Men’- their interpretation of Shakespeare’s ‘Tempest’ was greeted with both applause and laughter by the audience. Periodic costumes and cleverly used props aided the actors in their performance but it was the actors themselves that made it a truly enjoyable experience. 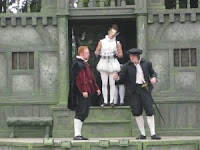 The ability of the actors became very apparent whilst I was watching the play from the sidelines, seeing them exit the stage was like seeing a personality switch as they came out of their characters for the brief period of time they were backstage. The majority of the actors had to take on two roles as there are only several men in their company making the costumes a vital part of the play as they helped the audience differentiate between who was who at different points in the performance.

However, even without the costume changes it was clear that the actors had developed their characters meticulously so it was obvious when they had switched into their second character. The matinee performance was watched by both a primary and secondary school and even though some of the younger students couldn’t understand the complex language I believe they enjoyed themselves as the actors put both effort and emotion into their performance making it understandable even to young minds.

Overall the play was an enjoyable experience showcasing Shakespeare in a more intimate environment.

Find out more about upcoming events at Harewood House on our website www.harewood.org/whats-on