The books that shaped me – Pauline Mayers 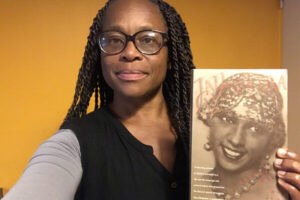 Pauline Mayers is an independent writer, theatremaker and choreographer based in Leeds and currently working on projects with the Geraldine Connor Foundation and Leeds Playhouse that link to Harewood.

1. A coffee table read you return to again and again.
I don’t generally tend to return to the books I’ve read unless it’s related to making performance. The themes I have had in my work have centred around British history, identity and care. Black and British: A Forgotten History by David Olusoga is one that comes to mind. The way that history is taught in schools is currently being hotly contested in light of the Black Lives Matter movement in recent weeks. Olusoga’s book with the accompanying BBC series re-integrates British history, recording the 18 centuries Black Britons have been present in the UK.

2. A book that has inspired you.
Last Night On Earth by the American choreographer Bill T. Jones, is like a meditation on his methods of making dance and his journey to becoming a choreographer.

3. A book that has related to your career or life path.
I was gifted a biography on the late Josephine Baker called Jazz Cleopatra by Phyllis Rose. Baker was an American dancer who took Europe by storm. Through this book, Baker became a mentor to me during my dance training at one of the top ballet schools in the country, the Rambert School in London.

4. A book you didn’t think you would like, but surprised you.
Recently I read (in a matter of hours!) Binti by Nnedi Okorafor. It’s a trilogy about a young student called Binti who is the first from the Himba people to gain a place at the most prestigious university in the galaxy, Oomza University. However, in order to attend, Binti must leave her home and travel the stars. Binti is about her journey. Okorafor creates a world that is fantastic and dark. I really loved the world and the characters created.

5. A book that in your opinion everyone should read.
A book I love to read again is Angela Saini’s Superior. A brilliant book about the origins of science from the 1700’s. This I feel is required reading for everyone in the UK.

6. A book someone passed to you and you passed on.
A book that relates to the work I make is Slavery, Family and Gentry Capitalism in the British Atlantic by Simon D. Smith. It’s about how the Lascelles family, the original owners of Harewood House, built an extensive business empire centred on the slave trade and finance in the West Indies. It’s a fascinating book, that shines a light on the main business interests of Henry Lascelles, which included his involvement in the transporting of the enslaved from “Floating Factories” off the Ghanaian coast to Barbados in the West Indies.

Follow @HarewoodHouse on social media to keep up to date with the latest stories and events from Harewood.