“The Royal Avenue” at Harewood

Earlier this week on the North Front, Harewood’s longest serving gardener of 34 years, Paul Slater, planted a young oak tree, which was grown in the Walled Garden from a seed collected in the grounds of Harewood. It was planted in honour of Her Majesty The Queen’s Platinum Jubilee, as part of The Queen’s Green Canopy initiative, which has the aim of creating a network of trees, avenues, copices and woodlands in honour of The Queen’s 70 years of service. The tree commemorates not only Her Majesty’s personal legacy but also marks the start of its own green legacy within Harewood’s parkland. 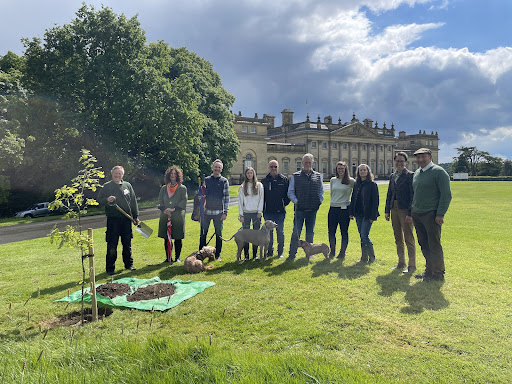 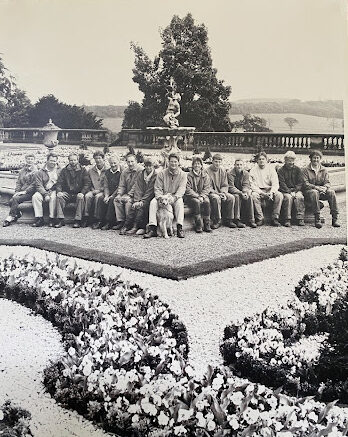 The oldest picture of Paul we could find in the archive (far right).

But the planting of trees – and particularly those with a connection to the Royal Family – has a long tradition at Harewood. It was one started by the first ever royal visitor to Harewood, the Grand Duke Nicholas of Russia, later Tsar Nicholas I, in 1816. The 2nd Countess of Harewood recorded the occasion in a letter to her sister, describing the Duke’s “dextrous” use of a spade to plant two young oaks in front of the House. She also noted that the whole affair had been inspired by the fact that the Grand Duke had planted two oaks at Chatsworth – clearly the Lascelles family could not be outdone by their ducal counterparts in Derbyshire! 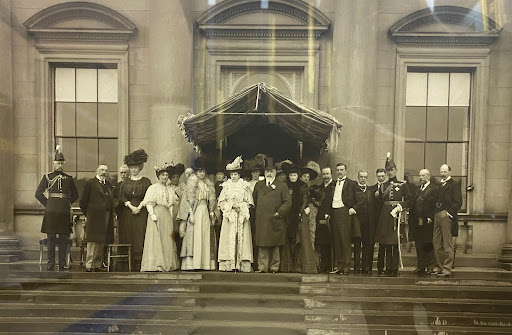 However, the tradition of royal tree planting at Harewood really took off in the 20th century, with the visit of King Edward VII, Queen Alexandra and their daughter Princess Victoria in 1908. Their overnight stay at Harewood was the result of an official visit to Leeds, where the King opened a new building at the University of Leeds; Harewood House had been “re-beautified” for their arrival and a concert planned for the evening’s entertainment. Before leaving the next day, the Royal party each planted a tree “on the lawn near the one planted long ago by Emperor Nicholas I.” King Edward VII and Princess Victoria both planted chestnuts, and Queen Alexandra a Daimyo oak. In fact, the historic collection at Harewood still contains the very spade used to plant the trees. 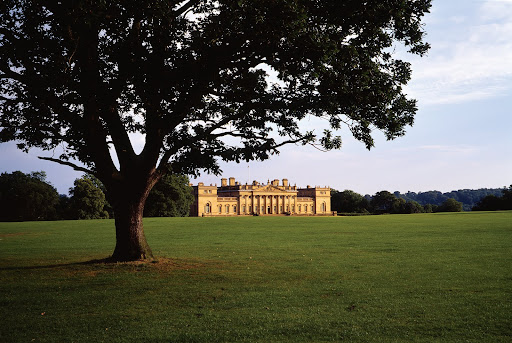 The next major royal event for the Lascelles family – and one that changed the course of Harewood’s history for ever – was the engagement of Henry, Viscount Lascelles (later 6th Earl of Harewood) to Princess Mary, daughter of King George V and Queen Mary in November 1921. The engagement announcement was quickly followed by Princess Mary and her mother’s first visit to Harewood, who were enthusiastically welcomed by the people of Yorkshire. To commemorate the occasion, both Marys planted a tree on the North Front. 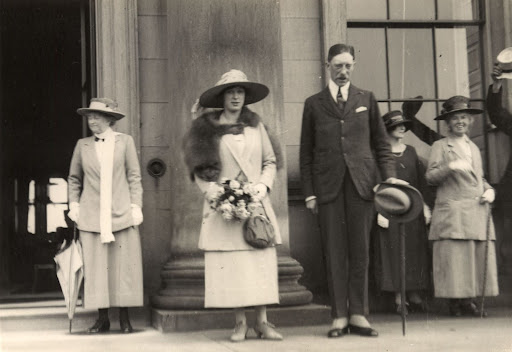 Princess Mary and Viscount Lascelles outside Harewood House on the occasion of Princess Mary’s first visit to Harewood, 1921.

From that moment on, the close family links between Harewood and the Royal Family prompted a regular series of royal tree planting due to a high frequency of family visits. Indeed, the ring of trees that can still be enjoyed today around the back of the North Front – mainly made up of Cedars of Lebanon – was formed as a result of this tradition. The planting of cedars specifically appears to have started in 1923 by Prince Edward (later King Edward VIII), who planted a young tree not far from the iconic Copper Beech that stands directly opposite the front door of the House (planted by the 6th Earl respectively to commemorate his coming of age).  By the early 1930s, one newspaper reported that a “Royal Avenue…was growing promisingly” at Harewood and that it was steadily “assuming an imposing appearance”.

Over the next two decades, cedar trees were planted by almost all senior members of the British royal family, often on several occasions, including King George V, Queen Mary, Prince Edward (later King Edward VIII), the Duke and Duchess of York (later King George VI and Queen Elizabeth), Prince Henry (the Duke of Gloucester), Prince George (the Duke of Kent) and Princess Alice (a granddaughter of Queen Victoria). On one occasion, King George V had to plant his tree by proxy due to bad weather:

“At noon there was no slackening of the downpour… but a tree was planted after all. That came about through the suggestion of the King. He saw his grandsons, two sturdy, active boys, and then said “Why should they not plant the tree?”. The two boys [George and Gerald Lascelles] jumped at the idea. Receiving permission, they rushed off to Abbott, the chief forester, and secured a car to take them to the selected spot. There they carried out the deputised task with great gusto. “It was” said a spectator, “a first class job”. That done, the two boys returned triumphantly to the House and presently sat down to tea at which the chief guest was “grandfather”. 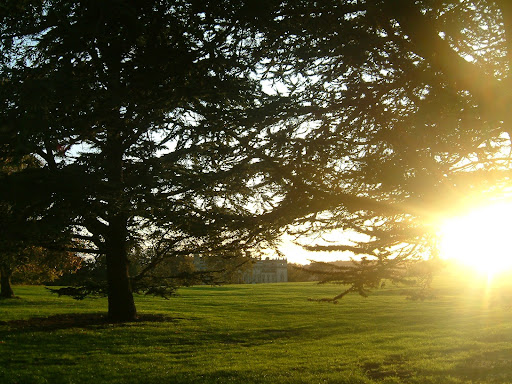 Cedars on the North Front, looking back towards the House. Photo credit: Trevor Nicholson

The post-war years of the late 1940s and 50s, brought the next generation of royals to Harewood, as well as a new location for tree planting – the showfield, just beyond the church, each tree cited to form another ‘avenue’. In 1949, Princess Elizabeth stayed at Harewood for a three day Tour of Yorkshire, visiting various Yorkshire cities, landmarks and events, such as the Great Yorkshire Show, Roundhay Park and York Minster. To commemorate the occasion, she and Prince Philip both planted a sweet chestnut. Almost a decade later in 1958 – this time as Queen – Elizabeth planted another young tree nearby. 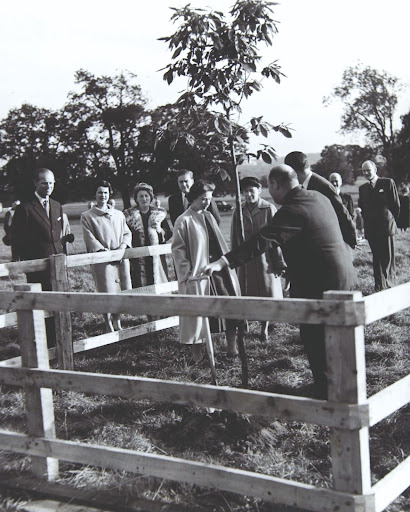 HM The Queen planting a tree in the showfield at Harewood in 1958. © Johnson Press plc

The Queen’s trees at Harewood, as well as those planted on other occasions by her sister and mother, can today still be seen on site. Like many commemorative trees, they embody memories of particular moments in history, but they also form an enduring symbol of the relationship between Harewood and the royal family.