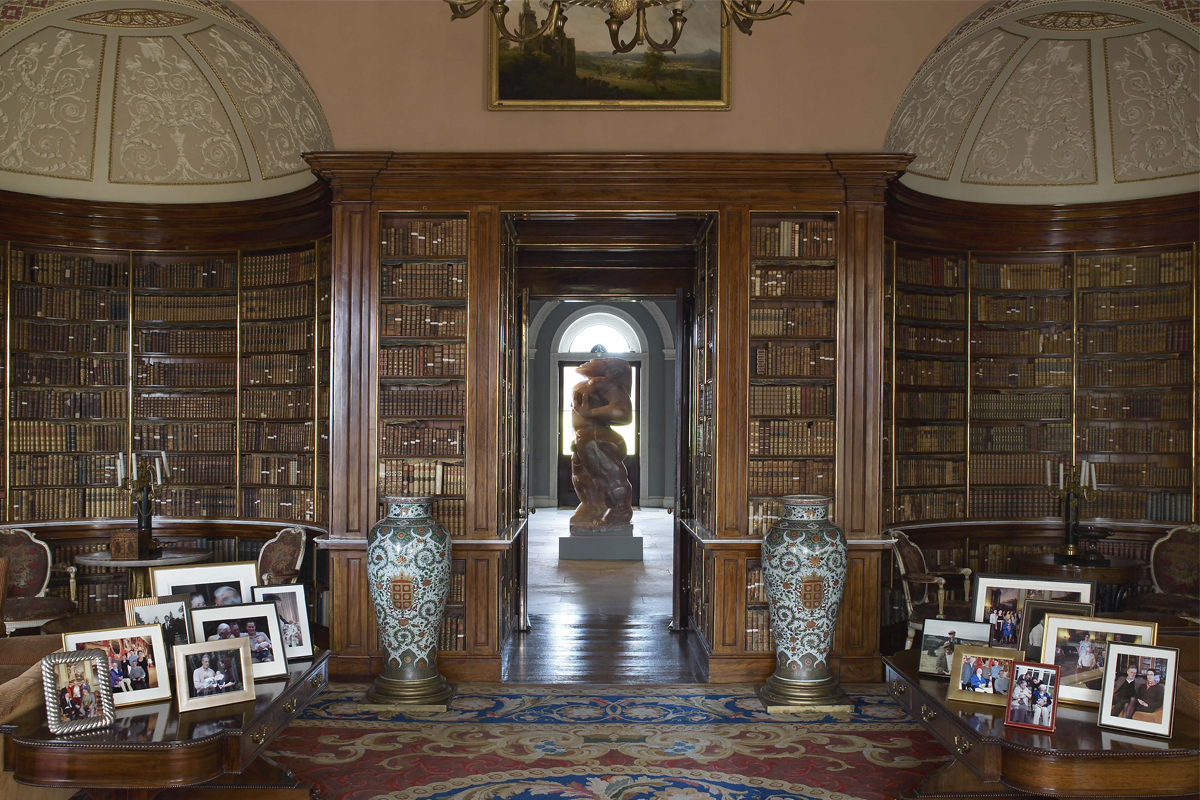 This World Book Day, we wanted to share some stories from the books that call the libraries at Harewood their home. There are more than 10,000 books held within the 3 libraries – Main, Spanish and Old Library- at Harewood, collected by every generation of the Lascelles family and covering a range of different genres. From Classic Literature to Zoology, the libraries aren’t short of a story to tell !

Vanity Fair is a novel by the English author William Makepeace Thackeray. Set against the backdrop of the Napoleonic Wars, the story follows the inter-linked lives of two women – the quick-witted Becky Sharp and the naïve Emmy Sedley – who both attempt to make their way in British society.

The novel’s title, Vanity Fair, references a fictional town named ‘Vanity’ in John Bunyon’s Pilgrim’s Process, which hosted a never-ending fair representing the sin of materialistic attachment. Thackeray’s narrative is framed as a puppet show taking place at this fair.

Vanity Fair’s subtitle, A Novel without a Hero, reflects the novel’s flawed characters and its satirisation of British society. 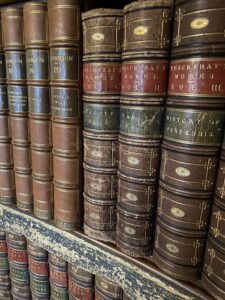 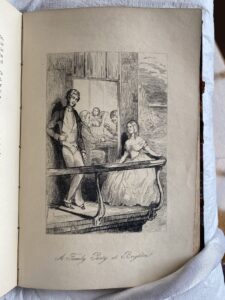 Vanity Fair was first published between 1847-1848 as a 19 volume serial – a popular method of publishing novels at the time. It was also illustrated with Thackeray’s own drawings.

The book was the first to be published under Thackeray’s real name, the author often choosing to use comic pseudonyms, such as George Savage Fitz-Boodle and Michael Angelo Titmarsh.

There are a number of Thackeray’s works in the libraries at Harewood, suggesting he was a popular author with the Lascelles family. This two-volume edition of Vanity Fair, published by Smith, Elder &Co. in 1869, belonged to the 5th Earl of Harewood.

Art and Design – The Gentleman and Cabinet-Maker’s Director, Thomas Chippendale, 1755.

The Gentleman and Cabinet-Maker’s Director, published in 1754 by the Yorkshire-born cabinet-maker Thomas Chippendale, was the first comprehensive catalogue dedicated to the design and production of furniture. It contained 160 engraved designs for a range of household furniture in a variety of styles. It enabled clients to order straight from the book or mix and match ideas to create something new.

The Director had widespread appeal and was an instant success. Not only did the book launch Chippendale’s professional reputation and generate trade, but it also played a key role in securing Chippendale’s design legacy around the world, with copies reaching as far as Russia and America. 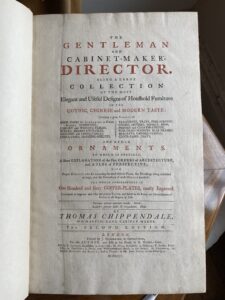 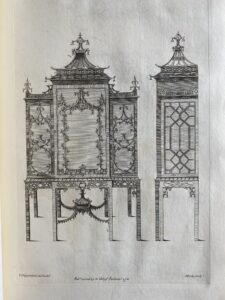 Harewood’s copy of the Director is a 2nd edition, published in 1755. It contains the bookplate of the 1st Earl of Harewood, though it’s possible it may have belonged to Edwin Lascelles, builder of Harewood House and patron of Chippendale’s most lucrative commission.
This copy was re-bound in the 20th century by the high-end book binding firm Riviere & Sons, decorated with tooled and gilt decoration on the spine.

Botany for Ladies was written by Jane Loudon, an English author who was a pioneer of both popular gardening manuals and science fiction.

Loudon’s first book, The Mummy, published anonymously in 1827, was a fictional account of living in Britain in the 22nd century and explored ideas around future technology. It caught the attention of John Claudius Loudon, a leading horticultural writer, whom Jane went on to marry.

After her marriage, Jane became fascinated with her husband’s field of horticulture, helping him with his research and publications. She realised that the highly technical language used in gardening manuals of the day was off-putting to women who might not have been taught much, if any, science as part of their education, and set about writing her own. 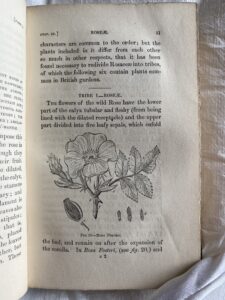 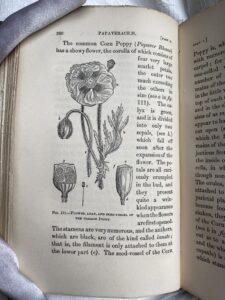 Becoming known as the ‘Mrs Beeton of the garden world’, Jane produced books that were precise and correct in content, written in an anecdotal style that was easy to follow.  The opening remark in Botany for Ladies (1842) reads: ‘The following pages are intended to enable my readers to acquire knowledge of Botany with as little trouble to themselves as possible.’

Her popular books helped thousands of women across the country to learn more about, and enjoy, gardening as a hobby. Jane was a self-taught artist and illustrated her own books.

There are a number of Jane Loudon’s gardening manuals in the libraries at Harewood, alongside works by her husband, though not, unfortunately, The Mummy.

Thomas Pennant was a Welsh naturalist and travel writer. British Zoology was one of his first publications, forming a comprehensive study of animals across the British Isles.

It contained information on quadrupeds, birds, reptiles and fish, and was accompanied by over 100 colour illustrations. The work also included an appendix analysing and notating bird song.

British Zoology was first published in two volumes between 1766 and 1767 in folio form. Due to the inclusion of many expensive large-scale illustrations, the book was not a commercial success, however it was well received by fellow naturalists and earned Pennant a position as a fellow of the Royal Society. 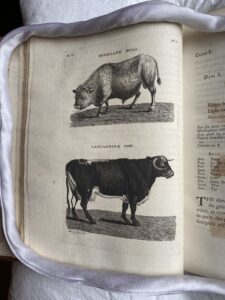 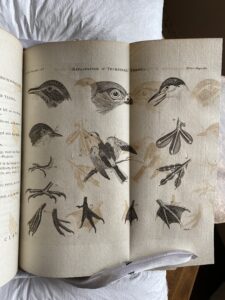 Harewood’s copy of British Zoology is a later 4th edition, in a smaller ‘quarto’ format, which would have been less expensive to produce. It is still, however, very well illustrated with engravings. Thomas Pennant travelled around Britain with the artist Moses Griffiths, whose sketches were often used to accompany his observations.

Pennant was also a travel-writer and made notes about numerous tours taken across Britain, one of which included a visit to Harewood. Although he saw promise in Harewood’s landscape, the House was not to his taste, which was ‘fitted up with a profusion of expense and ornamental gilding…calculated for parade more than comfort’.

On this voyage, it had been Cook’s mission to discover a shorter sea route for trade between Britain and the Pacific. It’s true purpose however, was concealed under the guise of returning the Polynesian, Omai, back to the island Raiatea, who had travelled with Cook to England two years. Omai had been presented to British society and even had his portrait painted by Sir Joshua Reynolds. 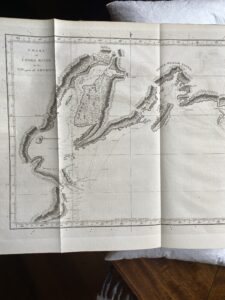 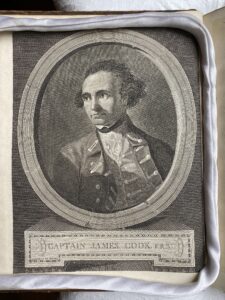 As a Captain of the Royal Navy, Cook spent a total of 12 years exploring the Pacific on three separate voyages. He is credited with making the first European contact with the eastern coastline of Australia and the Hawaiian islands, as well as the first recorded circumnavigation of New Zealand. Cook was killed in Hawaii in 1779 after attempting to kidnap the local ruler, Kalaniʻōpuʻu.

This book, based on Cook’s own journals, was so popular that the first edition sold out within three days. It contains several engraved plates and maps, illustrating the type of terrain encountered on his voyage as well as local individuals and animals.

The books within Harewood’s libraries are cared for by an independent charity. Whilst the house was forced to remain closed to visitors during the pandemic, our work to conserve these treasured objects never stopped. By Adopting a Book today you can help support the work of our Collections Care team, ensuring these books, and the many more items in our care, can continue to be shared when we are allowed to re-open, for the long-term benefit of the public.