Pictures on the move 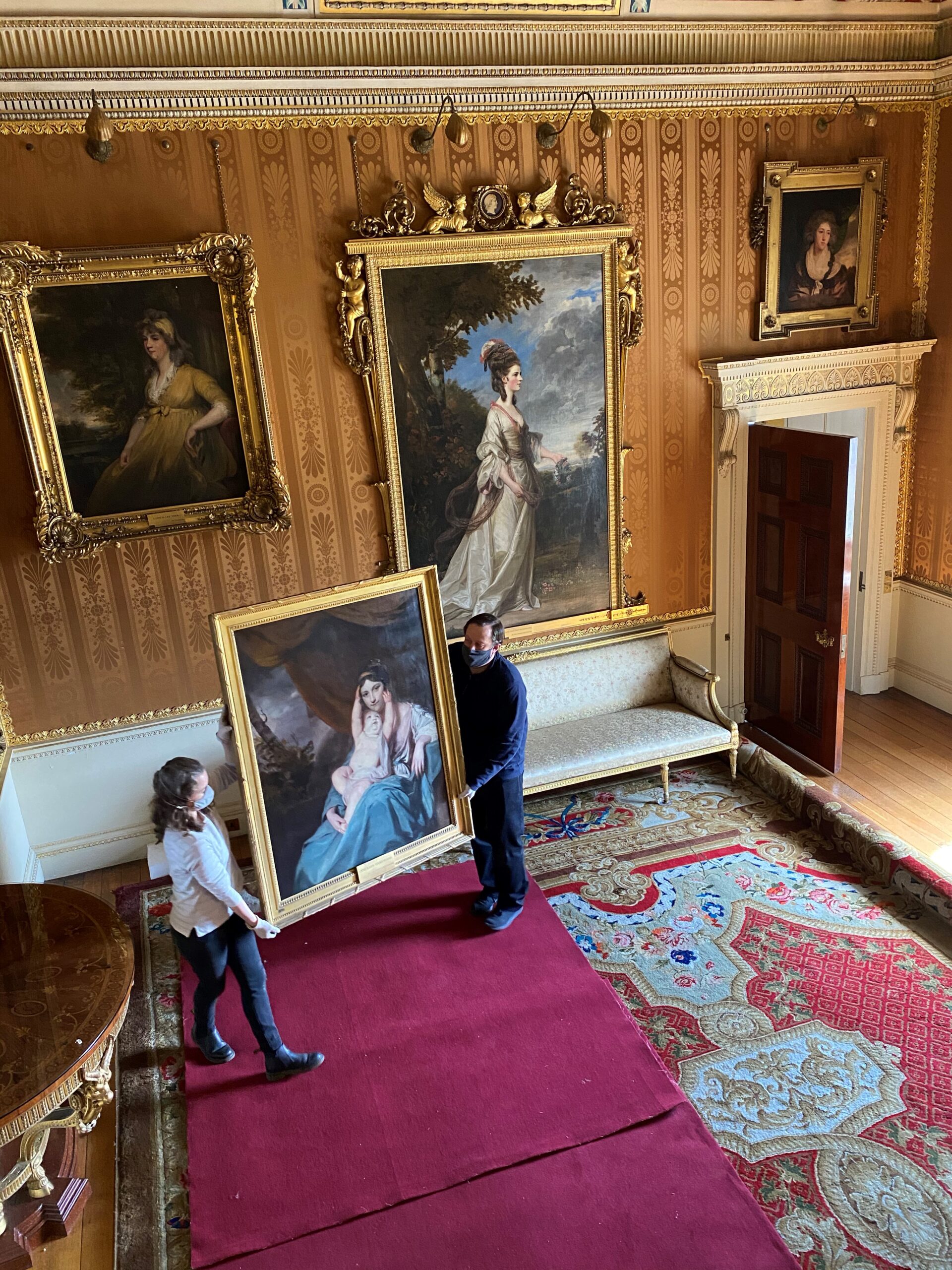 “Over the last couple of weeks the team have re-homed 15 pictures across the State Floor, taking 4-5 people approximately 4 full days to undertake.”

Hanging pictures in a house like Harewood is a little like playing Tetris – move one, and it inevitably means you have to move something else to fill its place, and on it goes. Each replacement has to be appropriate in terms of size, period, medium and content in relation to its new neighbours, so it’s a carefully thought through procedure. It’s something that the House and Collections team do often at this time of year, in preparation for new displays at the start of the season. Over the last couple of weeks the team have re-homed 15 pictures across the State Floor, taking 4-5 people approximately 4 full days to undertake.

The process is time consuming and sometimes logistically challenging. Most of the pictures moved during this year’s re-hang were located high-up on the walls of several different State Rooms, with carved and gilded frames making them heavy and cumbersome to manoeuvre (particularly those with elaborate decorative corners). The team used a scaffold tower to make the process as safe and secure as possible for both staff and artwork. It also offers the unique opportunity to experience a room from above and see Harewood’s magnificent ceilings up-close – a rare treat. 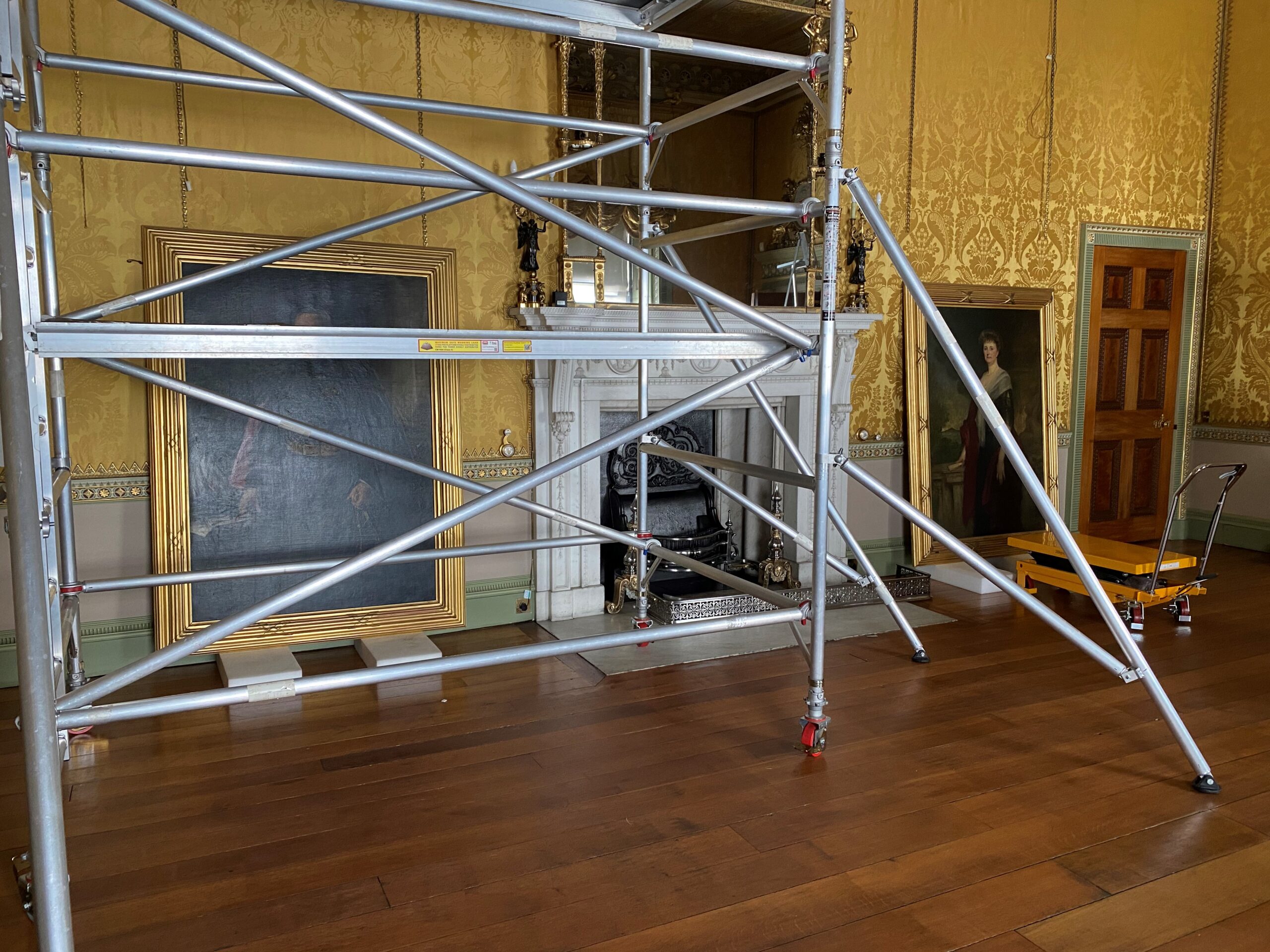 After having cleared a room of furniture, the scaffolding was erected and dismantled several times within each room, taking particular care to avoid delicate fixtures and fittings (such as chandeliers and mirrors) and ensuring carpets were protected using drugget. The works to be relocated were first of all removed from the walls across each of the different spaces, creating space to then reinstall each one in their new homes. Between locations, each picture rested for a time on foam blocks or easels, and if necessary picture lights and fixings were adapted to suit their new positions. Depending on the weight of the piece, dolly wheels were sometimes used to transport pictures between rooms. 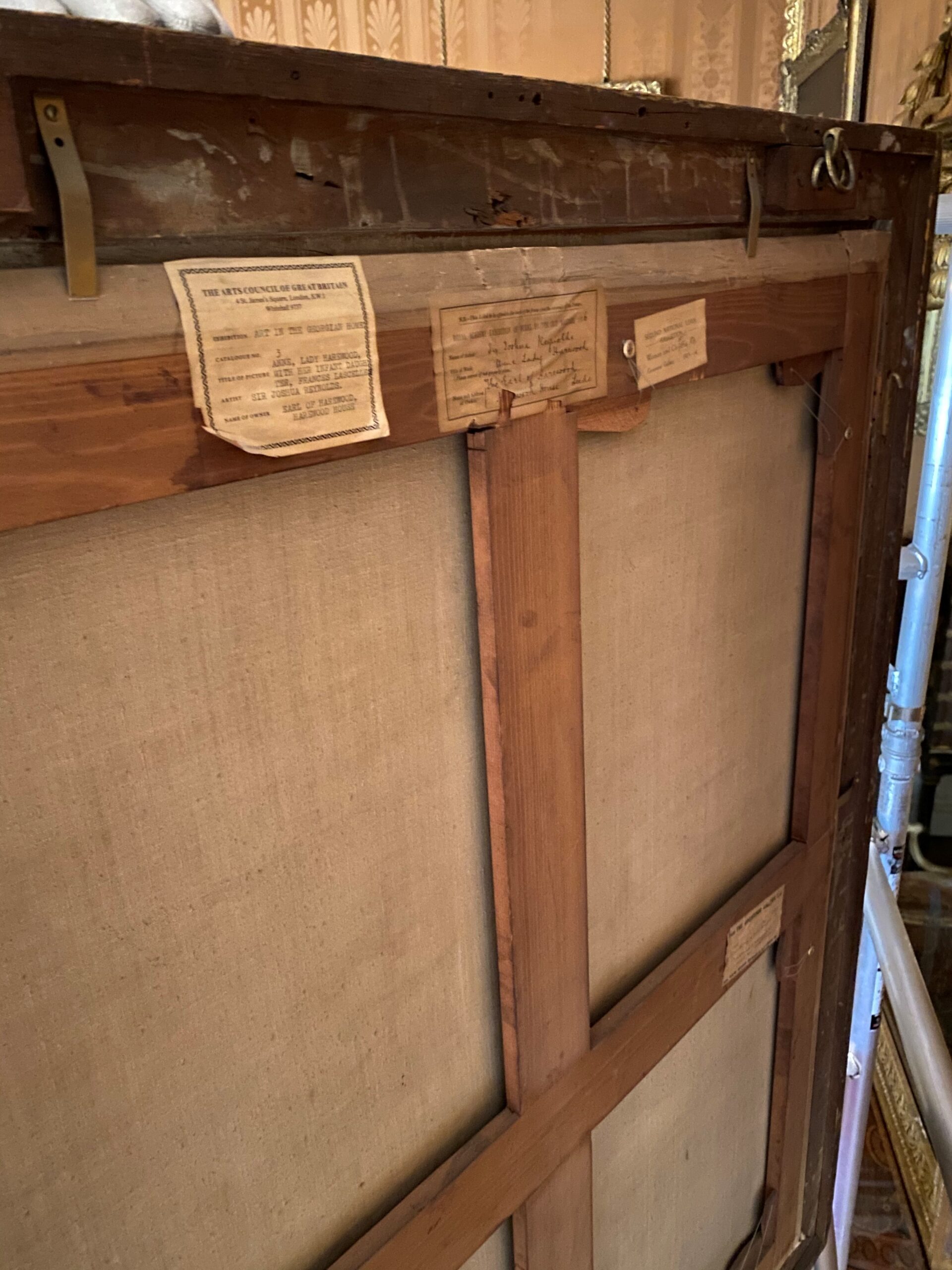 Whilst off the wall, it’s a great time to inspect pictures up-close and undertake a quick visual check of their condition, as well as appreciate their detail at close range. It’s also an opportunity to look at the reverse of a picture, which tells an alternative story about a work through the scars of framing alterations and old exhibition labels.

When re-hanging the pictures, a hydraulic scissor lift was used (where possible) to lift them to the first level of the scaffolding where they could then be manually lifted up the scaffolding and into position by the team. The pictures were then carefully attached to the walls using picture chains and hooks. Finally, a team member on the ground made visual checks to ensure the pictures were level – often it’s helpful to use the pattern of the wall hangings to make sure they are sitting at the same height as their neighbours.

Although re-hangs take time and planning, they are a rewarding task. It is always interesting to see familiar pictures in new places – literally seeing them in new light, and allowing new comparisons and new stories to be told.