The Harewood House Gallery contains an outstanding collection of Renaissance paintings, many of which are by Venetian artists. These were collected during and after the First World War by Henry George Charles Lascelles, who later became the 6th Earl of Harewood, after he had unexpectedly inherited a great fortune from his great-uncle, the 2nd Marquess of Clanricarde, in 1916. When choosing which pictures to acquire the 6th Earl gave careful consideration to how each work would be displayed in his home. Initially, this was at Chesterfield House in London, and later at Harewood House, where he moved to in 1930 following the death of the 5th Earl of Harewood.

Frames have an enormous impact on the display of pictures, yet they are rarely given much attention. The 6th Earl of Harewood appears to have been a keen and involved interior designer, and he recognised the importance of frames from the early days of his collecting. On 10 June 1917, while he was on military duty in the trenches of the First World War, the 6th Earl wrote to his mother, the 5th Countess of Harewood, about one of his recent purchases:

‘I think the frames very important to make the best of the pictures. The Greco’s frame is wrong and will have to be put right but I have not made up my mind about it.’

When he purchased Allegory by El Greco in 1917 the painting was housed in a gold frame. The 6th Earl later had this replaced with a second-hand antique frame, which is much darker and features gilded foliate corners and centers, in which the picture remains today. The dark frame compliments the dramatic lighting of the picture, and is of a similar style to those produced during El Greco’s lifetime in sixteenth-century Spain. The 6th Earl’s choice of an historical frame demonstrates his interest in the origin of paintings in his collection, and his desire to ensure that each picture was shown to its best. 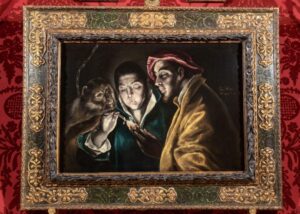 When antique frames were not available, the 6th Earl occasionally commissioned new frames to be made in an appropriate historical style. This is true of the frame around the picture by Alvise Vivarini and Marco Basaiti, called Madonna and Child with St John the Baptist and St Jerome. When he purchased this picture in 1917 it was housed in a gold frame which was much later in date than the picture itself. The 6th Earl commissioned a new frame in 1931 from the Florentine frame-maker Ferruccio Vannoni, with assistance from his art advisor Dr Tancred Borenius, who had many contacts in the international art world and spoke fluent Italian. Vannoni’s work was highly regarded in Britain, and he was employed by trustees of the National Gallery and by leading art dealers. The design for the frame around the Vivarini and Basaiti is based on a specific early sixteenth-century Venetian model. This type of architectural frame is known as a tabernacle frame, and there are several examples in the Gallery at Harewood. The 6th Earl asked Vannoni to give the frame an ‘antique patina’ so that the fresh gilding did not stand out too brightly next to the older frames in his collection. 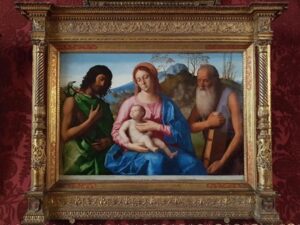 In 1932 the 6th Earl commissioned a second frame from Vannoni, this time to house his portrait of Benedetto Soranzo by Tintoretto. That painting had previously hung in the Dining Room of Chesterfield House, the 6th Earl’s London home, where it was fixed into an architectural frame above the chimneypiece. When the picture was brought to Harewood House in the early 1930s it therefore did not have its own portable frame, which it would need in order to be displayed. Vannoni was instructed to produce a different sort of frame for this portrait, again ensuring that it was historically accurate to the picture. Vannoni’s invoice describes the commission as being for ‘a frame entirely carved in wood with decoration pierced in relief. Gilded in gold, double thickness toned antique.’ It is interesting to compare the frame around this Tintoretto portrait with the antique (though probably not original) frame around Titian’s Francis I, as the two are presently hung symmetrically either side of the chimneypiece in the Gallery at Harewood House. Titian and Tintoretto were contemporaries both working in Venice during the sixteenth-century, and it is therefore appropriate that these two portraits – which are of different sizes but both approximately square – should be housed in strikingly similar frames. 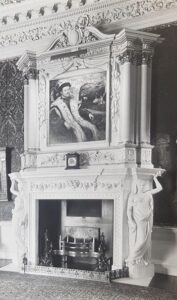 Though some do appear similar, none of the frames around the Renaissance pictures in the Gallery at Harewood House are identical. The 6th Earl of Harewood displayed his collection in frames which reflected the time and place of each painting’s original creation, and the frames are therefore just as varied – and arguably as interesting and beautiful – as the paintings themselves.