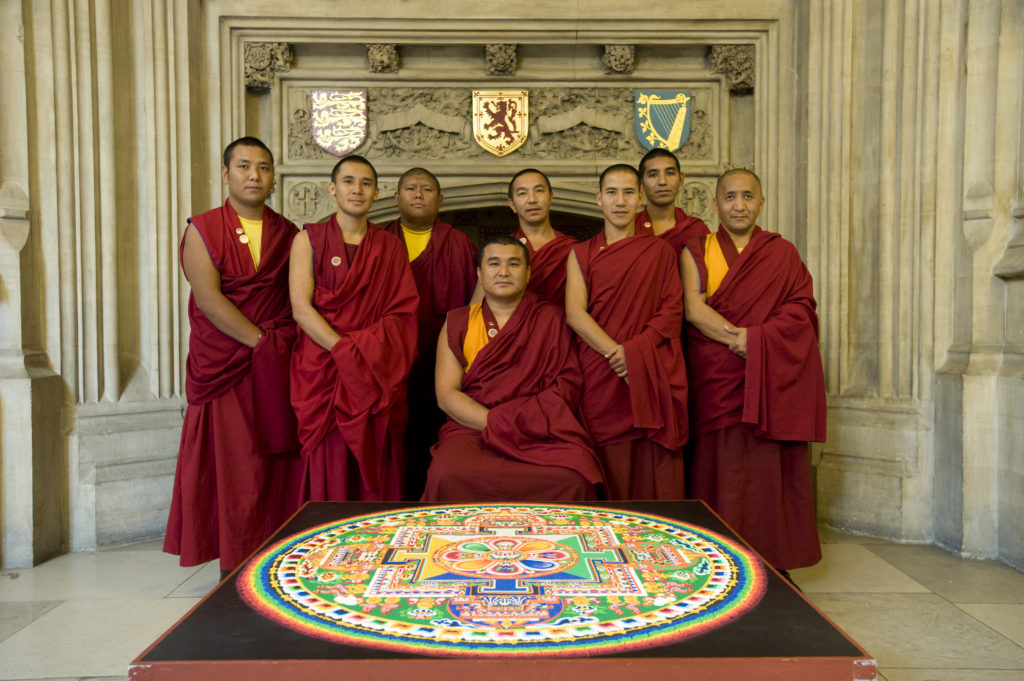 There will be opportunity throughout the week to watch as the monks construct a traditional Tibetan Sand Mandala, and to be present at the Dedication ceremony at the start and at the Destruction Ceremony at the conclusion of the exhibition. Join us at the Stable in the Courtyard, and watch as the sand mandala develops each day. During the week, the monks will also be running a series workshops and performances focused around Tibetan monastic art.

What’s on throughout the week?

Tashi Lhunpo Monastery, founded in Shigatse, Tibet, by the 1st Dalai Lama in 1447, has now been re-established in exile, and there are currently 400 monks studying Buddhist philosophy in Bylakuppe Tibetan settlement, near Mysore in South India. The Tashi Lhunpo Monastery UK Trust was set up in 2003 to raise awareness of the Tibetan situation and to support the monastery in India by fund-raising.  This Trust has been organising cultural tours since 2001, and the monks have performed in theatres, art centres and village halls all over the UK and Europe.

What is a sand mandala?

A sand mandala is an intricate picture made entirely from grains of coloured sand. The mandala is used in the Tantric tradition of Tibetan Buddhism to help with meditation. Once a sand mandala is created, a ritual destruction then takes place, symbolising the Buddhist belief in the transitory nature of material life.

You can see the building of the sand mandala throughout the week at Harewood, within the Stable in the Courtyard, before watching the destruction, which takes place on Sunday 15th September at 2pm.

Harewood has long-standing connections to the Himalayas and to Buddhism. The Himalayan Garden here is home to the Harewood Stupa, a Buddhist monument built in 2004 by monks from the Himalayan kingdom of Bhutan. It is the only one of its kind in the UK.

The current Earl of Harewood, David Lascelles, was instrumental in the commissioning of the Harewood Stupa. After visiting Bhutan in 2002 he invited Lama Sonam Chophel, a master-builder of stupas, to build an Enlightenment Stupa at Harewood. The construction took place over three months in the summer of 2004 and the stupa was formally consecrated the following year in a ceremony presided over by the distinguished Lama Baso Karpo, also from Bhutan. Since its construction, Harewood has welcomed many eminent Lamas from India and Nepal to visit, make offerings and lead prayers at the stupa.

You can visit the Harewood Stupa throughout the open season here. It is located in the Himalayan Garden close to the Lakeside Path.