The Queen at Harewood

Princess Elizabeth and Prince Philip stayed at Harewood for a tour of Yorkshire, and my mother of course went round most of the time with them. So, for at least part of it, did I, and I remember the procession of cars and the miles and miles of cheering crowds through which we crawled.

Harewood has had links to the Royal Family throughout its history, however its connection was cemented in the 20th century upon the marriage of HRH Princess Mary, later The Princess Royal, to Henry, Viscount Lascelles in 1922. Upon inheriting his father’s title in 1929, Henry became the 6th Earl of Harewood and he and Princess Mary moved in to Harewood House, making it a Royal Household.

Princess Mary was the third child and only daughter of King George V. She was a sister of the Duke of Windsor, later King Edward VIII (who abdicated in 1936) and Prince Albert, Duke of York, later King George VI. Born in 1926, Her Majesty Queen Elizabeth II was therefore a niece of Princess Mary. Princess Mary had two sons, George – later 7th Earl of Harewood – and Gerald, who were cousins of Elizabeth just three and two years her senior, and whom she saw regularly as a child. Whilst Harewood ceased being a Royal Household on the death of Princess Mary in 1965, the family ties and bond remains; the current Earl of Harewood, David Lascelles, was the Queen’s first cousin once removed and Godson.

Growing up, Elizabeth saw her Yorkshire-based relations on both public, private and ceremonial occasions, corresponded with them throughout her life, and visited Harewood several times over the years. 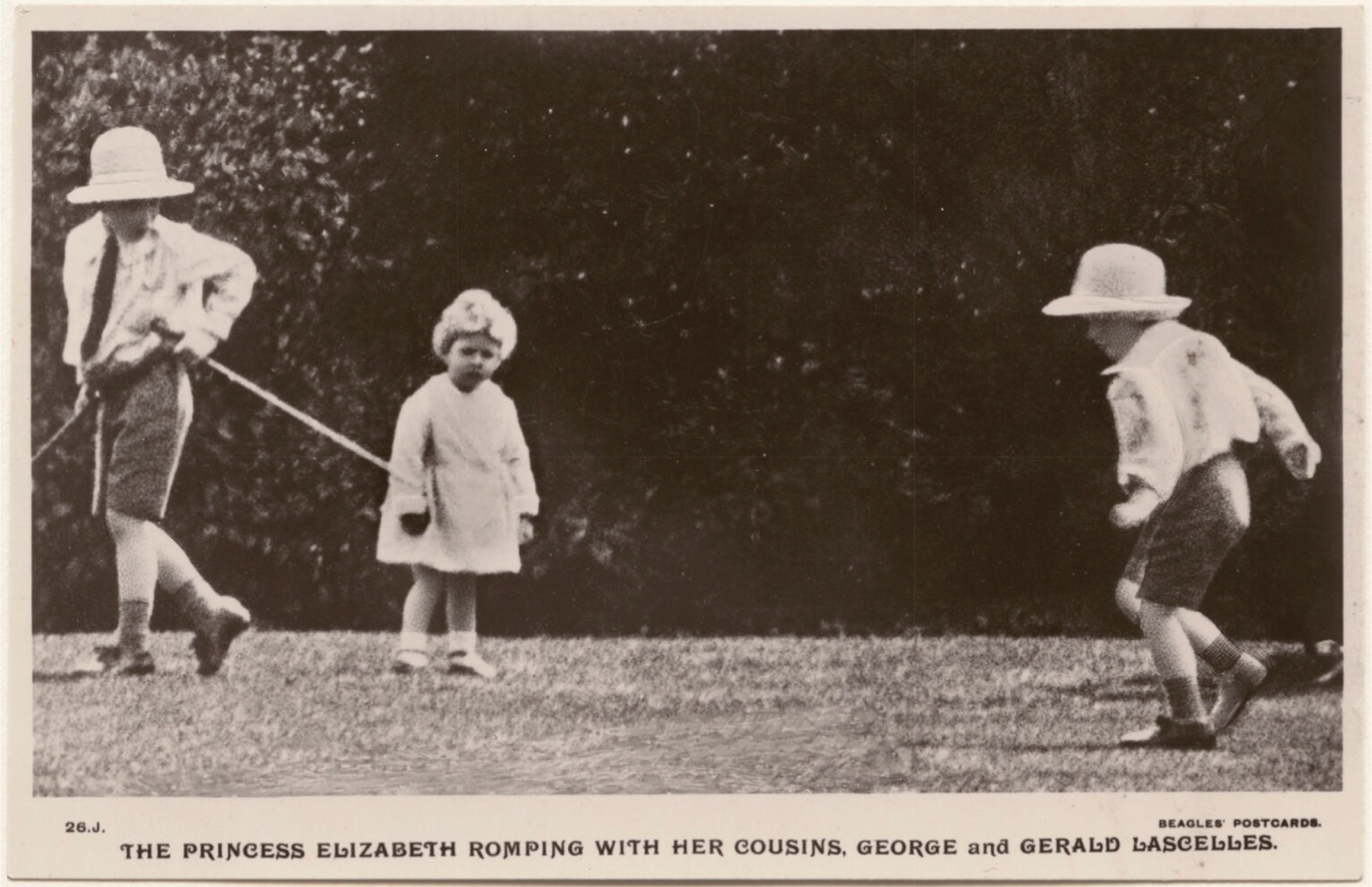 As a recently-married Princess, Elizabeth and Prince Philip undertook a three-day Tour of Yorkshire in 1949, taking in various towns and cities, including visits to the Great Yorkshire Show, Roundhay Park and York Minster. Harewood House became Princess Elizabeth’s base during her time in the county.

‘During the Summer [of 1949], Princess Elizabeth and Prince Philip stayed at Harewood for a tour of Yorkshire, and my mother of course went round most of the time with them. So, for at least part of it, did I, and I remember the procession of cars and the miles and miles of cheering crowds through which we crawled. The crowds tended to close in after the Princess’ car had gone by and the effect was startlingly claustrophobic, a condition to which I reacted by an attack of sleepiness. I was sitting between my mother and her lady-in-waiting, Gwynedd Lloyd, who woke me up once saying she had just seen a woman by the side of the road waving a goose at the royal car.’

Watch the royal visit and tour on British Pathé >> 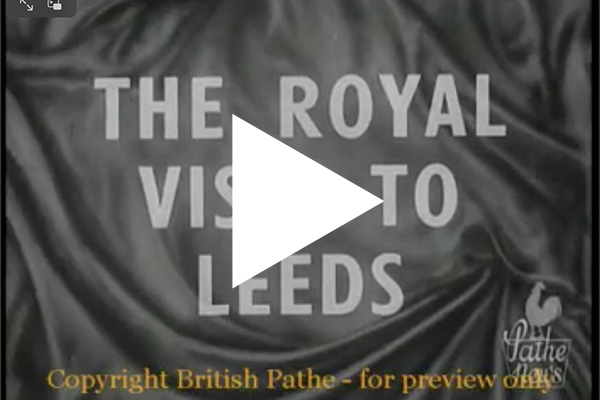 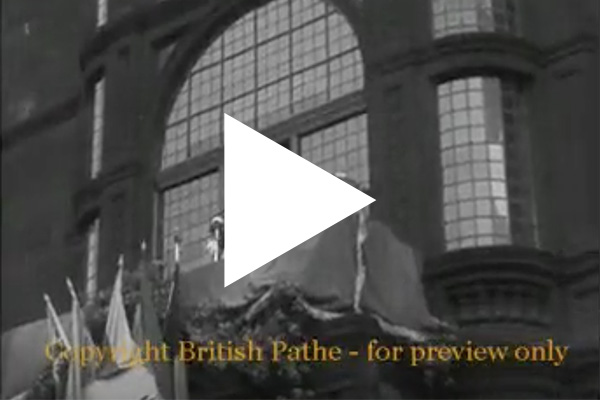 As part of Their Royal Highnesses’ visit, she and Prince Philip also planted a sweet chestnut tree in the park at Harewood. By this time, the ring of trees around the back of the North Lawn had become known as the ‘Royal Avenue’ following a string of royal tree planting by senior members of the Royal Family that took place in the years after Mary’s engagement and marriage to Viscount Lascelles.

Five years after her coronation in 1953, Her Majesty The Queen stayed at Harewood in 1958 to attend the Leeds Triennial Music Festival. Princess Mary was its Patron (from 1949), and in 1958 her son, George Lascelles, 7th Earl of Harewood, became its Artistic Director. She also planted another tree in the grounds at Harewood.

‘My mother had written to invite the Queen to come [to the 1958 Leeds Festival] and she had accepted. The problem from then on was not so much how to cope with her visit as how to deal with the rush of tickets that followed the announcement. The Queen was to go to the Grand Theatre and to two concerts, and the rehearsals for her visit were not without their comic overtones. Every kind of person was press-ganged into appearing as someone else, and to the amazement of bystanders we processed up and down the steps of the theatre, round and round the corridors and the lifts of the Town Hall, in and out of the Gallery of the Great Hall of the University, until we felt we had got it so much into our heads that, whatever improvisation was necessary on the day, nothing could go fundamentally wrong. Slightly to the surprise of many of us, it didn’t.’

Princess Mary died in the spring of 1965 after suffering a fatal heart attack whilst walking by the lake at Harewood with her son, George. Senior members of the Royal Family attended her funeral at All Saints’ Church, Harewood, including The Queen, the Duke of Edinburgh and Queen Elizabeth, the Queen Mother. 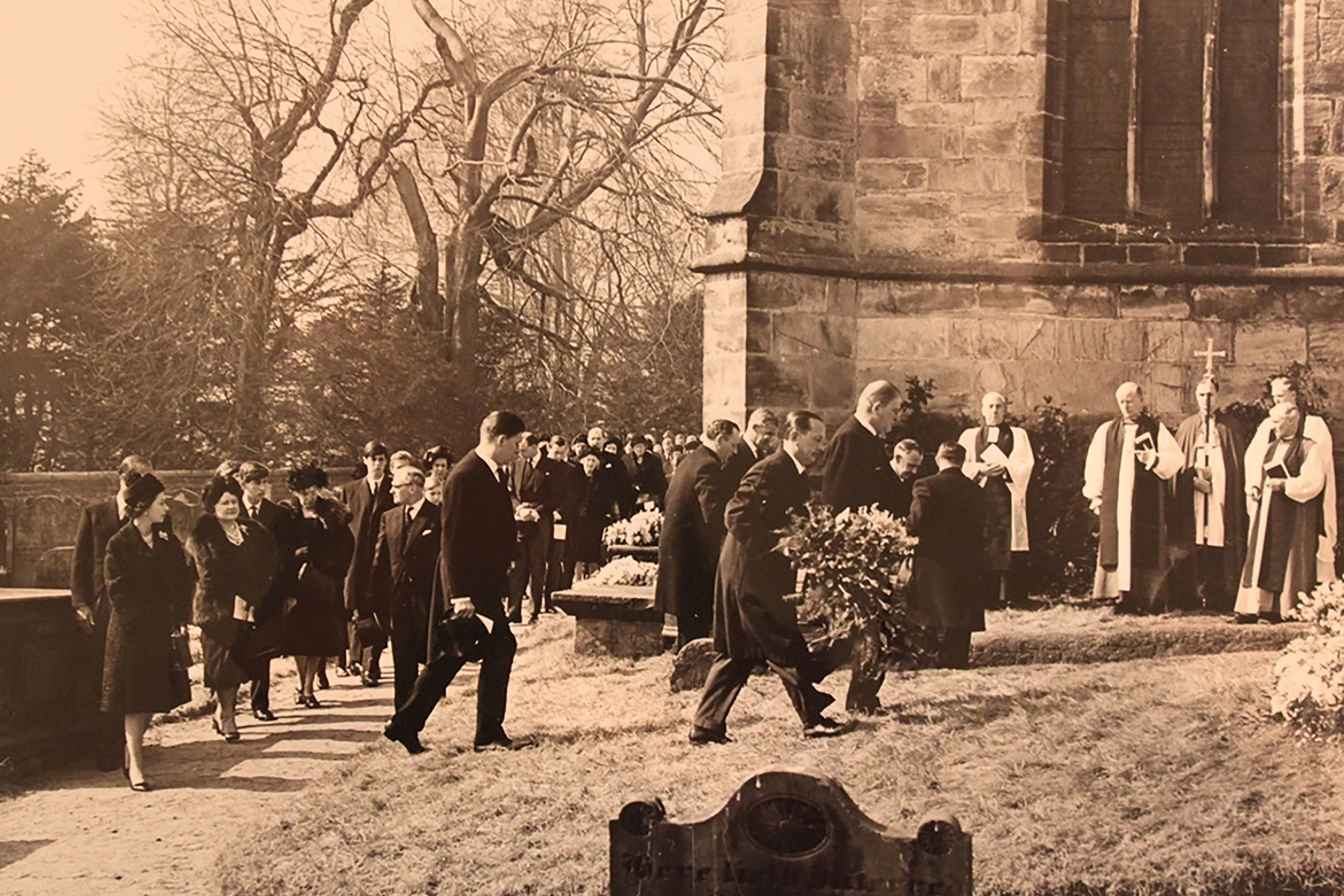 Royal Guests, including The Queen and The Queen Mother (far left) gather for the funeral of Princess Mary, 1965

As part of a series of visits around the UK in her Golden Jubilee year, The Queen visited Harewood where she was enthusiastically welcomed by people from across the county. A varied and diverse festival parade was performed on the front steps of the House, celebrating the last 50 years in West Yorkshire. During the same trip, The Queen also visited the purpose-built Emmerdale set on the Harewood Estate, where she witnessed the Post Office being engulfed in flames as part of a scene being filmed.

One of the groups at the Festival included performers from Leeds West Indian Carnival which was founded by Arthur France in 1967; he is now the first subject of Harewood’s Missing Portraits series, which opened this last weekend following Queen Elizabeth’s passing – he remembers the times he met The Queen with great fondness and called a ‘mother to the world’. 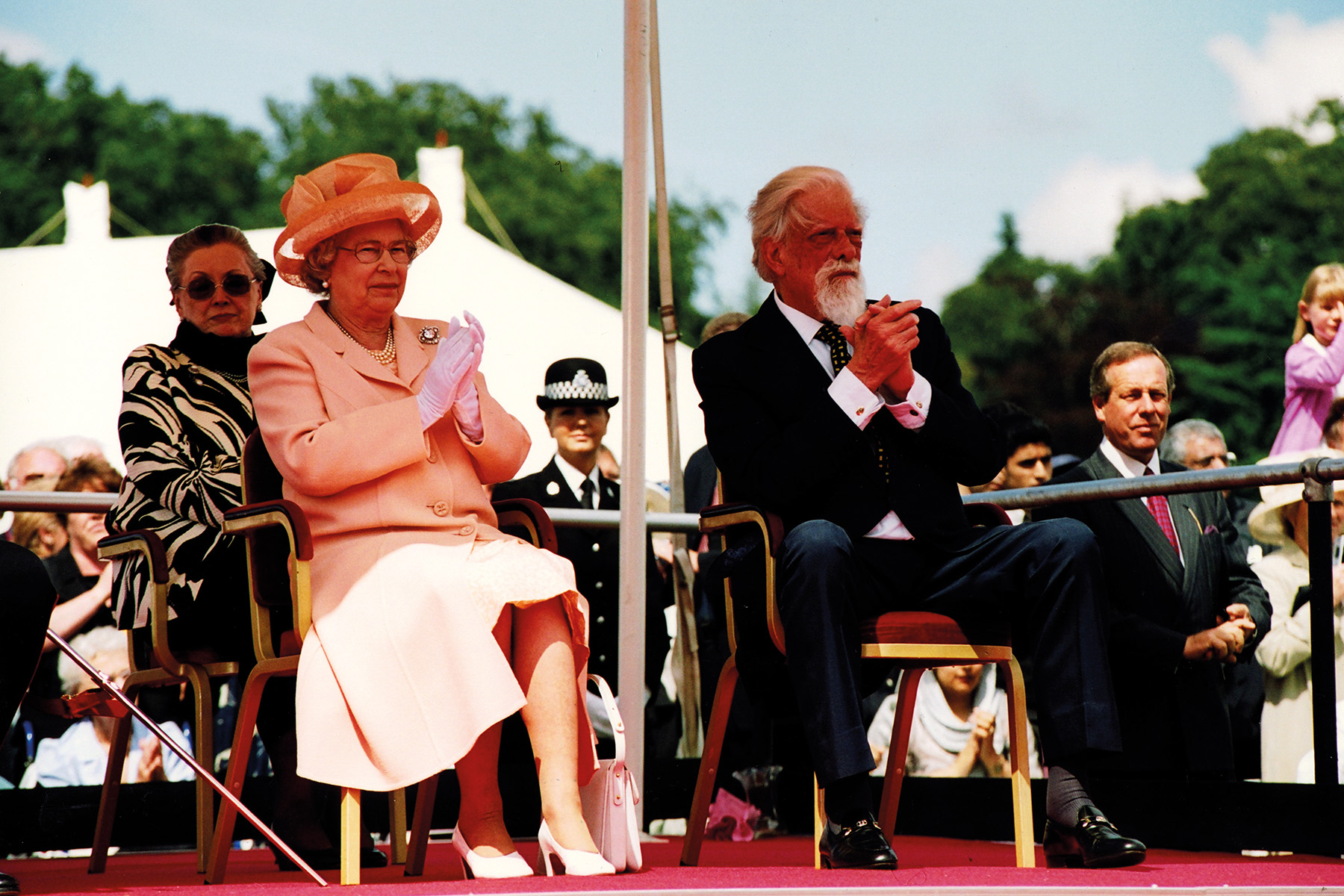 Her Majesty The Queen with the 7th Earl of Harewood watching the Jubilee celebrations at Harewood, 2002 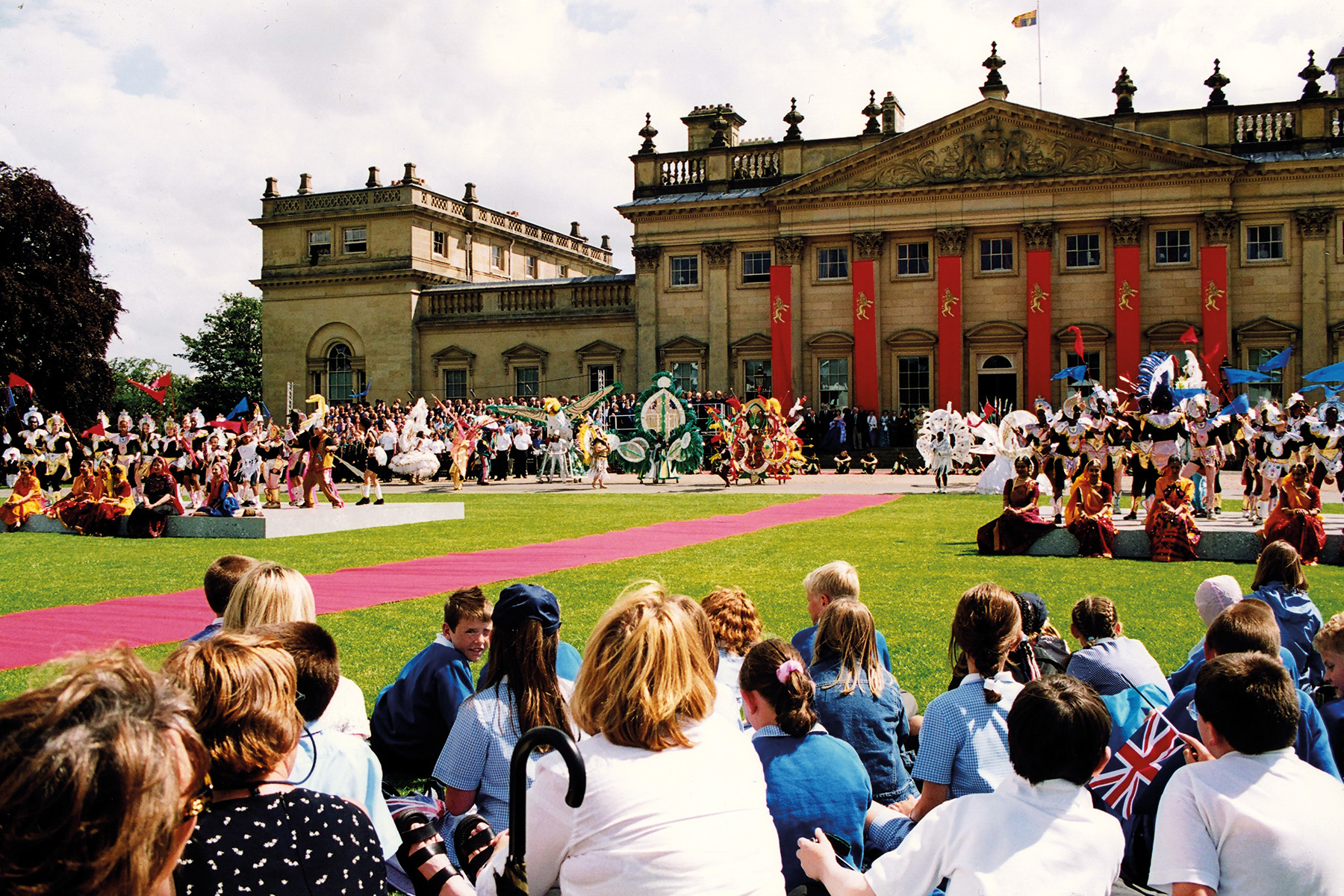 Whilst 2002 marked the last visit from Her Majesty to Harewood, the tree-planting tradition was reignited in The Queen’s name. Harewood’s longest serving gardener of 34 years, Paul Slater, planted a young oak tree in honour of The Queen’s Platinum Jubilee, which was grown in the Walled Garden from a seed collected in the grounds of Harewood. The tree is part of The Queen’s Green Canopy initiative, which has the aim of creating a network of trees, avenues, copices and woodlands in honour of her remarkable 70 years of service. The tree commemorates not only Her Majesty’s personal legacy but also marks the start of its own green legacy within Harewood’s parkland. 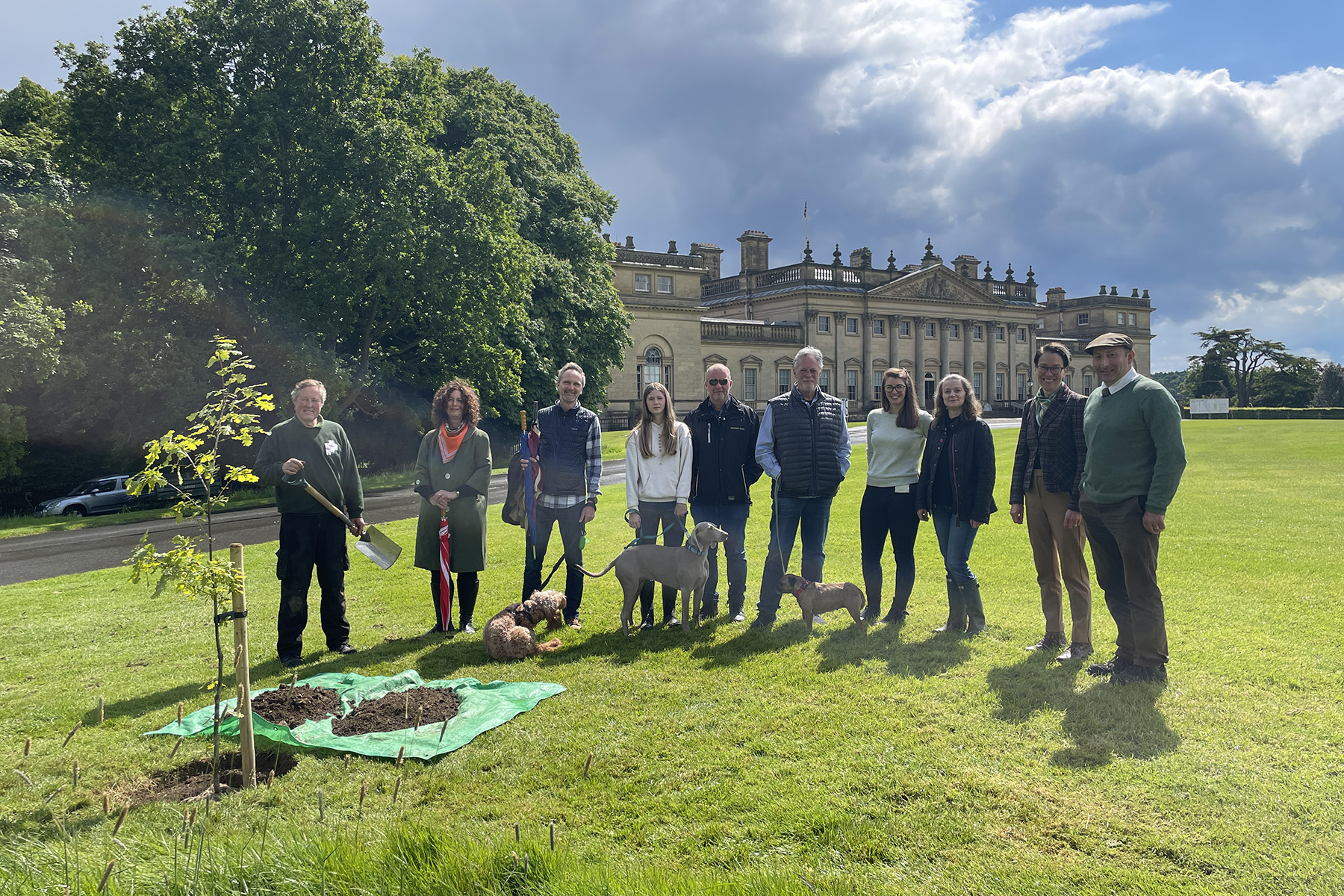 Upon Queen Elizabeth’s death her crown passed immediately to her eldest son, Charles. Like his mother, King Charles has visited Harewood on several occasions, most recently in 2013 and 2017, hosting events relating to his charitable foundations, the Prince’s Trust and the Prince’s Countryside Fund. In 2004, as Prince of Wales, King Charles attended the consecration of the Harewood Stupa, the only one of its kind in the UK, located in the Himalayan Garden.

Her Majesty The Queen will always have a special place in the history of Harewood. We wish King Charles III and his wife Camilla, The Queen Consort, and the Prince and Princess of Wales, the greatest of success in their own new beginnings whilst looking fondly back at Queen Elizabeth II’s incredible legacy and on the occasions she was here.

The Trustees, staff and volunteers of Harewood House Trust are saddened to hear of the death of Her Majesty Queen Elizabeth II, first cousin once removed and Godmother to the 8th Earl of Harewood, David … Read more

Her death is truly the end of an era, the end of the Second Elizabethan Age. Statement from David Lascelles, Earl of Harewood Harewood House, 9 September 2022 Queen Elizabeth was my first cousin once … Read more

‘The Royal Avenue’ at Harewood

Earlier this week on the North Front, Harewood’s longest serving gardener of 34 years, Paul Slater, planted a young oak tree, which was grown in the Walled Garden from a seed collected in the grounds of … Read more