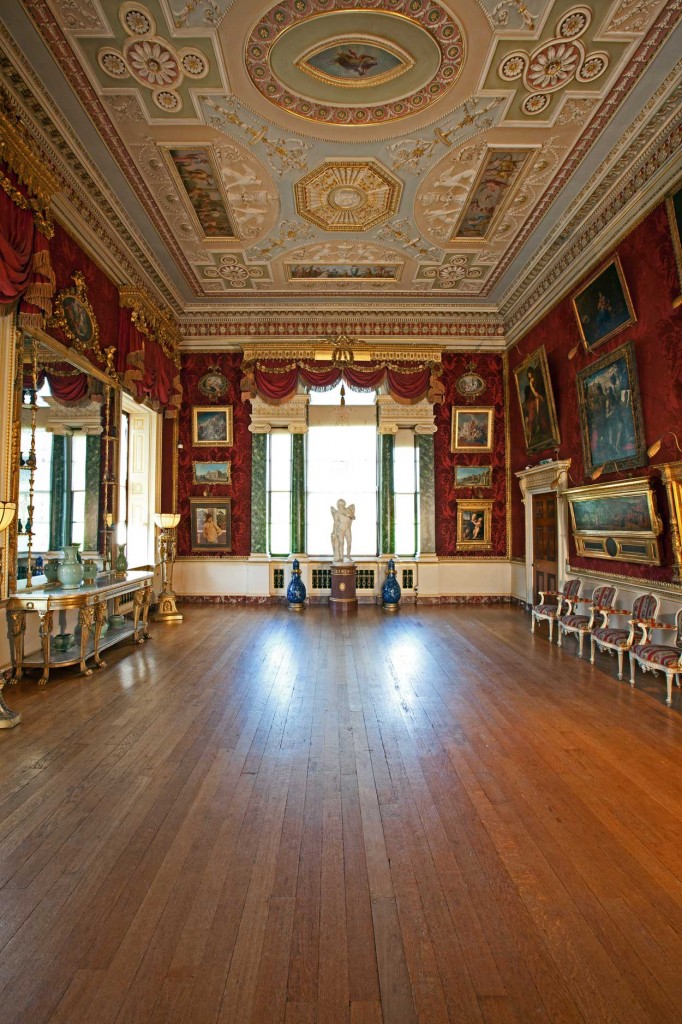 The Gallery is the largest room at Harewood House 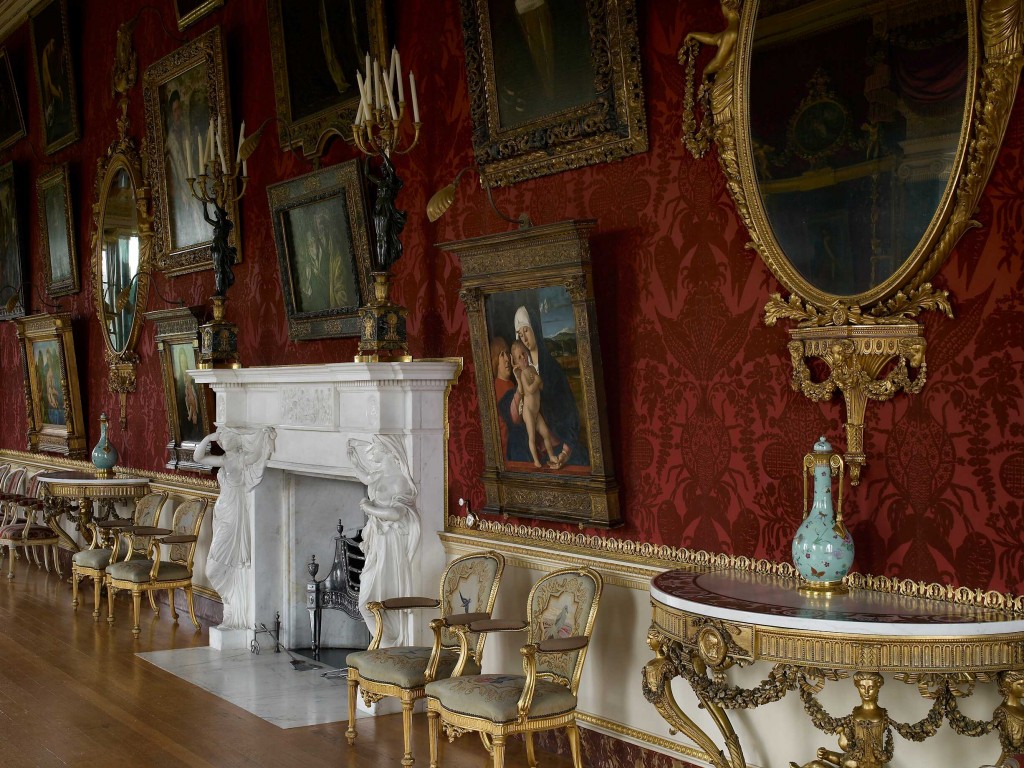 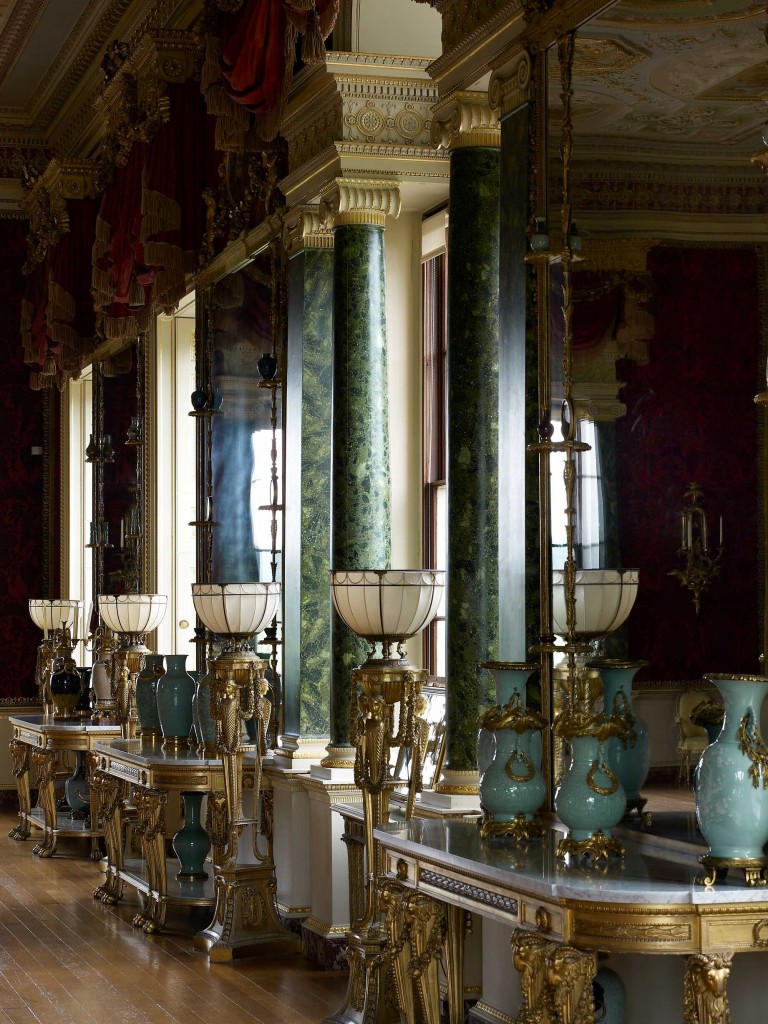 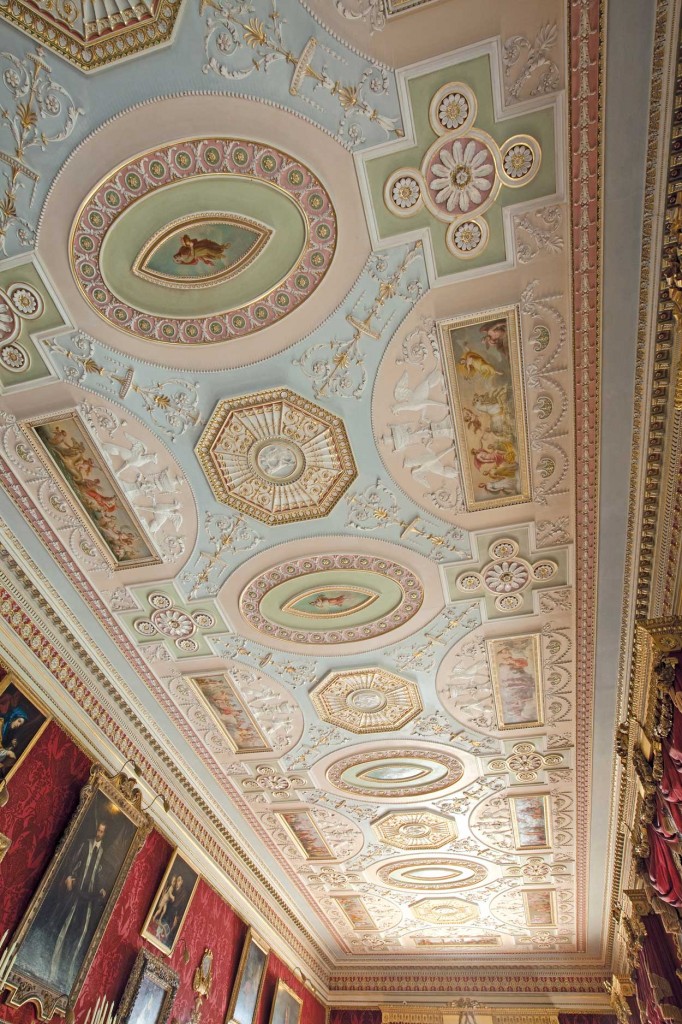 A Robert Adam design, this ceiling is a masterpiece of Georgian design

“This room extends over the whole west end of the house, and is 76 feet 10 inches by 24 feet 3 inches, 21 feet 3 inches high; it is truly elegant, and presents such a show of magnificence and art as eye hath seldom seen and words cannot describe”

So some 50 years after it was built wrote John Jewell in the earliest guide book to Harewood. It was one of Adam’s most magnificent achievements, but not immune on that account to alterations under Barry’s aegis. Columns supporting the central arches of the three triple windows, at either end and in the middle, were replaced by brackets (a favourite device of Barry’s, it would appear); and the chimneypiece, for which Adam’s design is dated 1776, was removed to the Dining Room and two Victorian replacements installed. We restored the chimney-piece to its original position in 1990 and placed the later pair (which, however handsome, were unquestionably intruders on Adam’s scheme) in store, and the main windows are again graced by the pillars and pilasters which, says Jewell’s guide book, were “painted by Mr. Hutchinson, of London, in imitation of the verd antique marble and admirably transcribed from a table in the same room”.

John Jewell describes the ceiling as of the palmyran taste; Adam drew it in 1769 and Rose executed it within a couple of years, its “oblongs, crosses, ovals and octagons, adorned with urns, bows, masks, festoons, rosettes, acanthus, daisy and honeysuckle” (the description is Richard Buckle’s). The exploits amorous, war-like or simply ceremonial, of Greek gods and goddesses are depicted on the ceiling by Biagio Rebecca, and four decorative oval paintings by Angelica Kaufmann top the mirrors between the windows. These, with their elegantly flanking cherubs, stand to the credit of Thomas Chippendale, as do the rectilinear chairs and sofas, and the elegant torchères (candelabra stands to which were added in the 1930s inverted shades for casting light onto the ceiling). To crown Chippendale’s achievement here – a celebrated feature of the room – are the pelmets, made of wood and beautifully carved to imitate a heavy material – the only ‘curtains’ the room was intended to have. The marble-topped console tables with their rams’ heads and lions’ feet on which the mirrors rest are later and by the younger Chippendale.

The Chippendale mirrors on the East wall were, according to Christopher Gilbert, probably designed for the Gallery but (on the evidence of the watercolour of that date by Scarlett Davis) displaced by the 1820s. Some decorative elements, removed perhaps to reduce height so as to accommodate the mirrors in another and lower room, were restored in 1989.