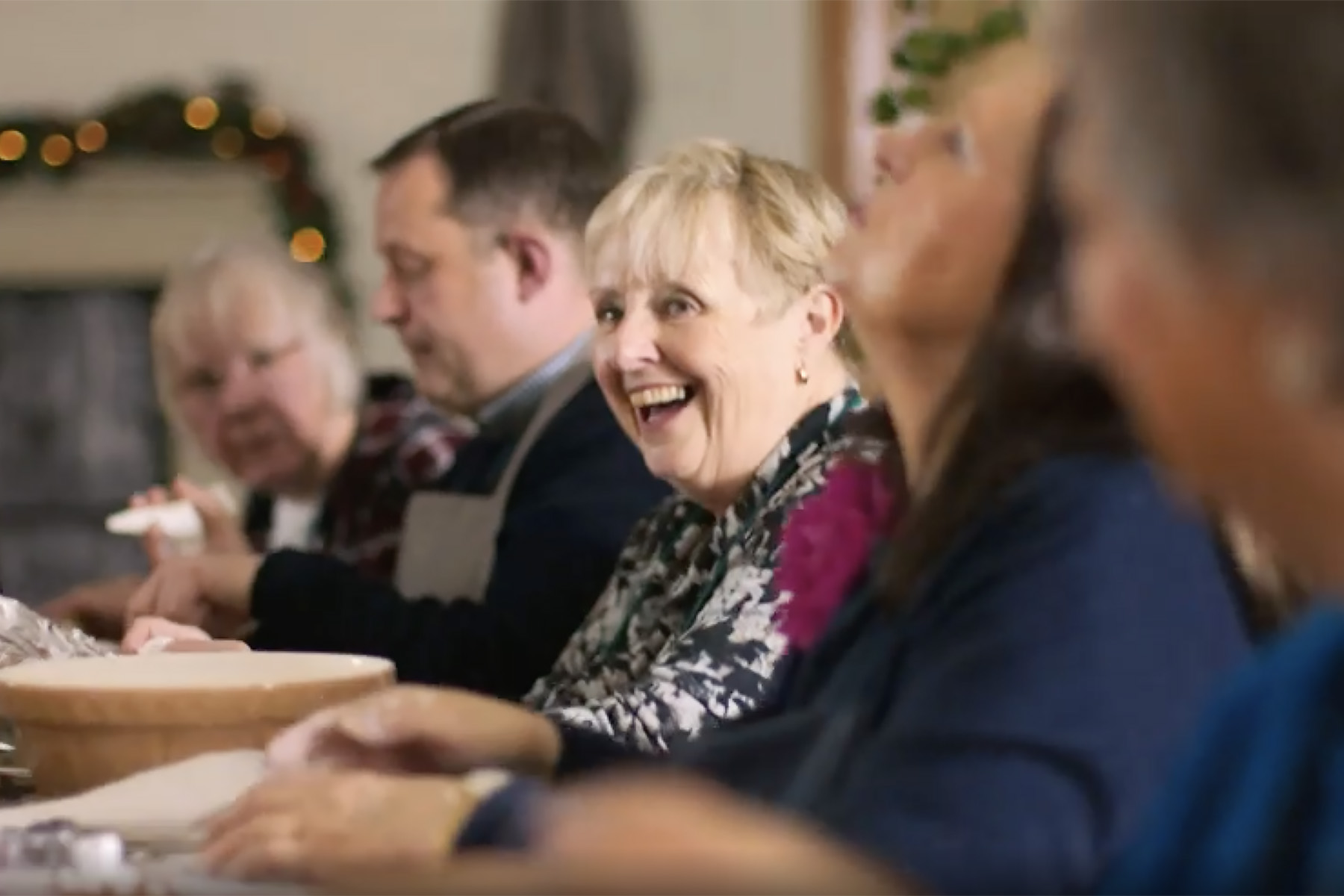 A personal reflection from Edward Appleyard, Harewood Director of Engagement, in memory of a very special volunteer.

Harewood is truly fortunate to have a committed group of over 200 volunteers who give up part of their week to help the Trust. Whether as a House Ambassador, volunteer gardener, Bird Garden keeper, bookshop or conservation assistant, or shuttle bus driver, we – as a charity – simply could not survive without the devotion of all these unique and wonderful members of our wider Harewood family.

There are also a group of those that go way beyond the extra mile, and act not just as a leading light but as a huge support for a much wider group of volunteers and staff too. And no one more fits that than our friend and much-loved volunteer Jill Lord, who sadly passed away earlier in late October.

Jill began volunteering at Harewood in 2007, and immediately made an impression on the whole team. Initially as a room guide in the House, she set about soaking up as much information as she could – something she did with fervour, a trait which cast a light on everything Jill was involved in.

Jill quickly became known not just for her passion for history and heritage, but more for how welcoming she was with people and how quickly she engaged our visitors, staff and other volunteers. She brought every single one of us with her on a journey through infectious enthusiasm, humour and warmth.

‘Hello darling, are you alright sweetheart?’, spoken in a light Geordie twang, was how Jill greeted me and many others from day one. Even on very rare occasions where she’d accost you with a ‘Ay, I’ve gotta bone to pick with you’ (not being one to hold back), Jill would never move on until she’d found out how you were, how you were feeling and if everything was ok.

Jill never veered from her stance of putting others before herself. Even if she was ill or under the weather she would be more bothered about making sure everyone around her was ok, before wanting to talk about herself. 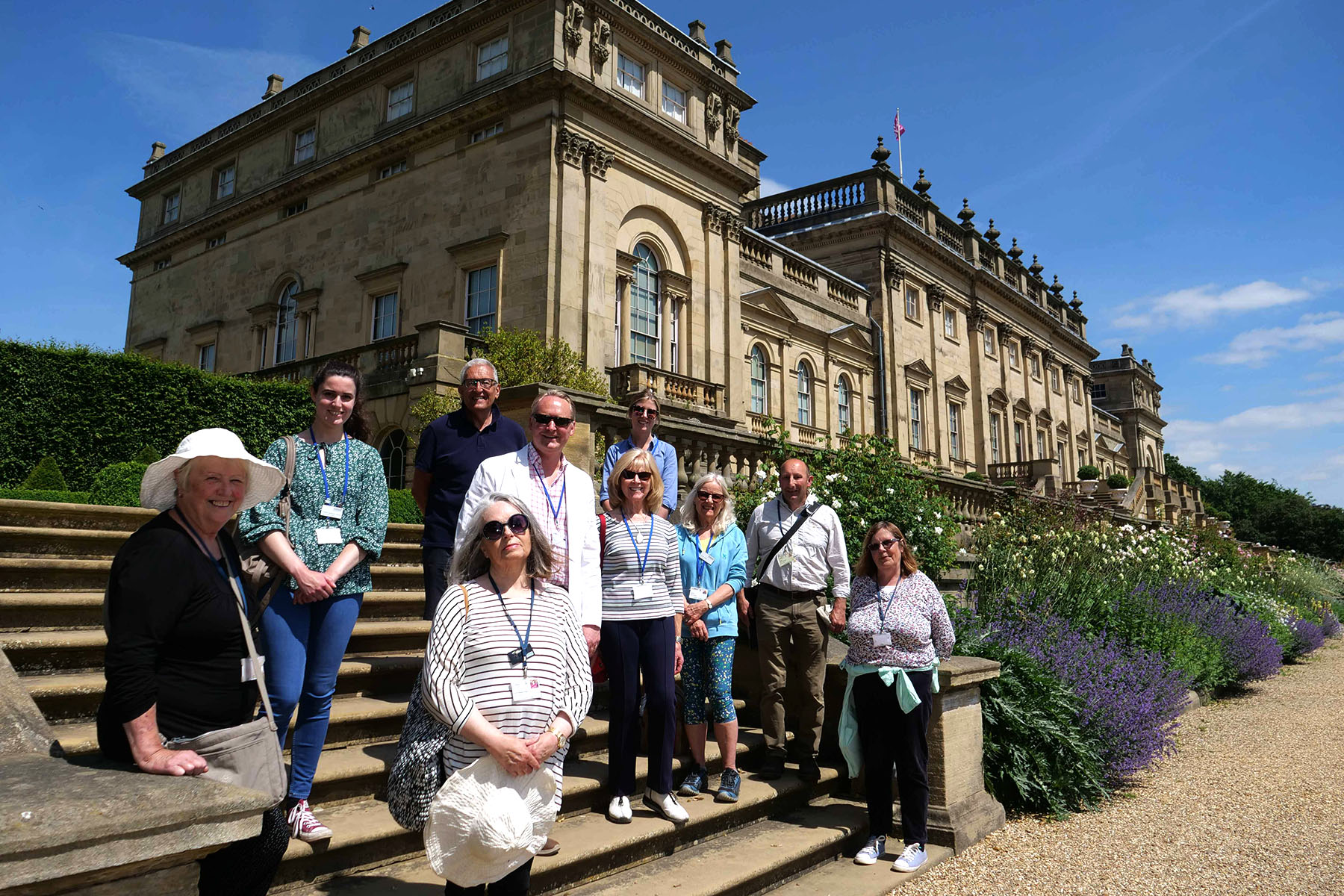 It was with this care and passion that Jill became leader of the ‘Tuesday team’ – a group that not only volunteer in the House on Tuesdays but have grown to become a core part of our Christmas Crew with many, Jill included, becoming Charity Champions too. Between them they’ve baubled countless trees, wrapped thousands of Christmas presents (both faux and real!), adorned fireplaces in garland and much more besides.

As Charity Champions they have carried with them promoting Harewood’s charitable cause – to ensure that everyone can enjoy this wonderful space, a value that reflects Jill as a person completely. And if that wasn’t enough, Jill can add ‘book conservationist’ to her remarkable CV, as part of a team that assist with the biennial and meticulously-delicate book clean of all the books in Harewood’s vast collection. 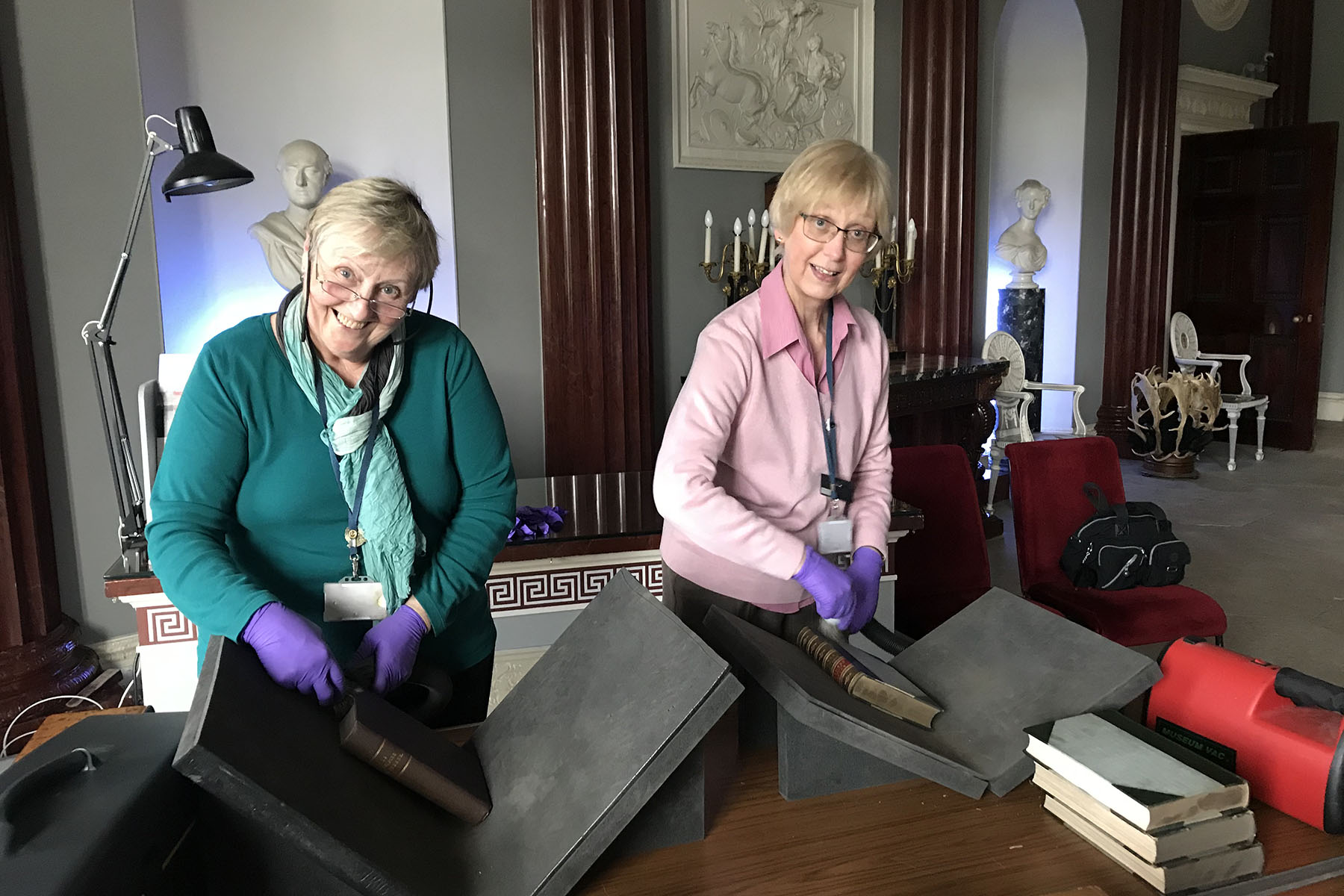 It might seem hard to imagine a group of volunteers being raucous, but the Tuesday team do not disappoint by any stretch of the imagination. Loud and always fun-filled when not greeting members of the public, one of the Tuesday team bought Jill a service bell to ring them all to attention when they began their team briefing of a Tuesday morning, the only thing to cut through the giggles. They’d meet at the end of their shifts late on a Tuesday afternoon to have coffee, cake and more catch-up every week without fail, always with a weekly dose of laughter.

Lockdown was particularly isolating for some of our volunteers, many retired, some living alone. Jill was the glue that kept the Tuesday team together – sharing stories and jokes through their WhatsApp group, lifting everyone’s spirits.

At the end of each season Jill would arrange for a Tuesday team outing for dinner and an annual celebration, at which she gave each one of them a thoughtful gift as a thank you for the support she had received throughout the year.

Her generosity with her time, but also just her sheer determination, led to Jill joining the newly-formed Secondhand Bookshop team when it opened in 2011. Here Jill found her real passion with something that met all of her natural skillsets – leadership, grit, organisation, salesmanship and more, many of which she honed during her many years working at Marks & Spencer (a place where even if she was just shopping on her day off she couldn’t help herself popping on a till and showing a new staff member how to do something, with speed and kindness).

Jill kept meticulous records for the Bookshop. She would think nothing of challenging our Director of Finance if the income listed on reports did not match what she expected them to be, accounting for every penny which acts as a donation to the charity.

Earlier this year, Jill was the driving force behind the bookshop’s relocation from Terrace Cottage to its new home in the Courtyard. A huge success, it has already raised £6,750 for the Charity since it reopened in August, and in its 10-year history Jill’s been part of a team that have raised £125,000 for Harewood – an incredible achievement. One of her proudest moments was marking reaching £100,000 at a celebration with Lord Harewood. 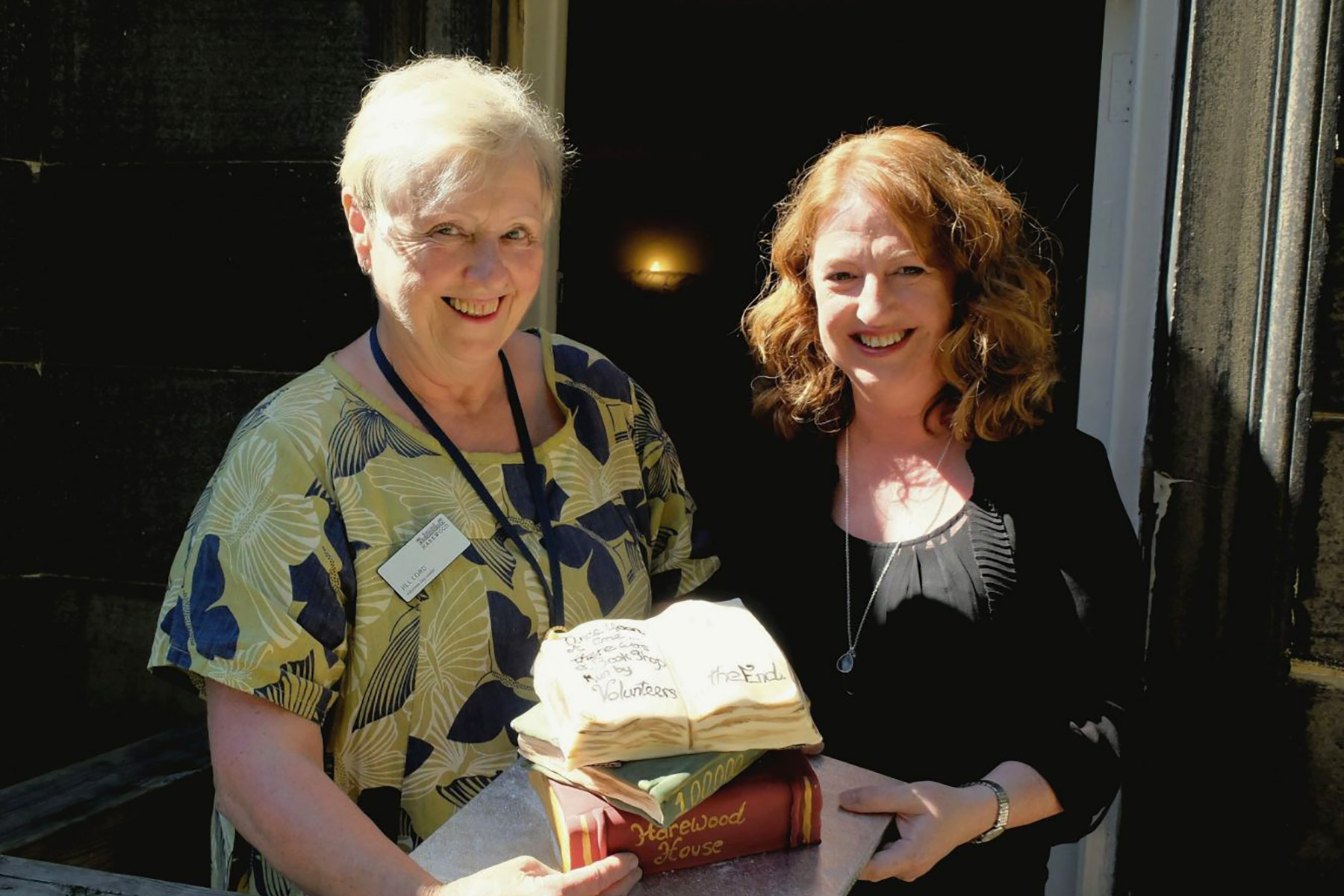 A moment in the limelight …

And then came Jill’s moment in the limelight when, in 2018, she was part of a one-hour TV special – Mary Berry’s Country House at Christmas – in which she was filmed icing some of the 1,000 gingerbread men alongside Mary that overflowed in Harewood’s Old Kitchen during Christmas 2018; her cheery smile beamed into our homes on Christmas Day on BBC Two. Jill, overjoyed, fitting the natural bill of Harewood’s very own national treasure, alongside another much-loved national treasure.

Leadership doesn’t happen by chance though, and part of Jill’s charm was her bold, forthright belief in what she was trying to achieve. For new volunteers and those that she mentored, there could be no doubt that it was the ‘Jill way’ or no way – not that it wasn’t meant with the sincerest kindness.

Jill could be counted on to stand up at an all-volunteer meeting and challenge our leadership team on anything she believed that needed to happen – a consistent and passionate voice. If anyone questioned why she might be doing something they’d get short shrift – ‘mind your own business, you’ve got your own job to do’ – though it was always with a wry smile and a twinkling eye. 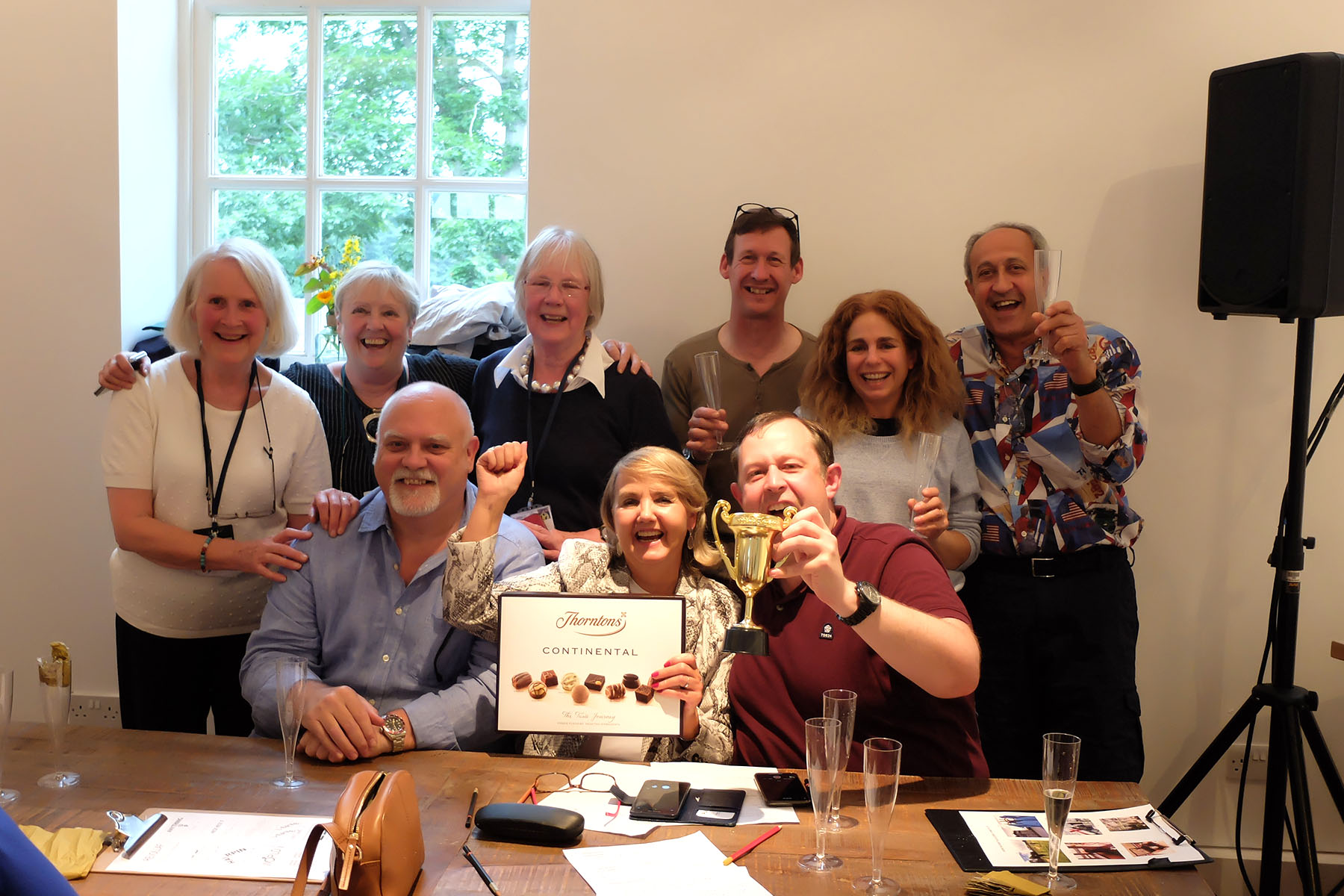 Losing a member of our Harewood family is always difficult, but losing Jill – after a short but defiant fight with Covid-19 – feels especially hard. To mark Jill’s incredible contribution, the Trust will be adopting a book in Harewood’s library in her memory, keeping a piece of Jill in the archive for all time, in a place where Jill gave such joy to so many people and where she found such a warm home for her passion and energy.

‘Would you like a cup of coffee sweetheart?’, she’d say when I walked into the old bookshop in Terrace Cottage which had its own kitchen.

‘Come and sit down and let’s see what we can do about this, together’.

Jill’s family have set up a JustGiving page, donating towards the charities that Jill was passionate about. Donate here >>