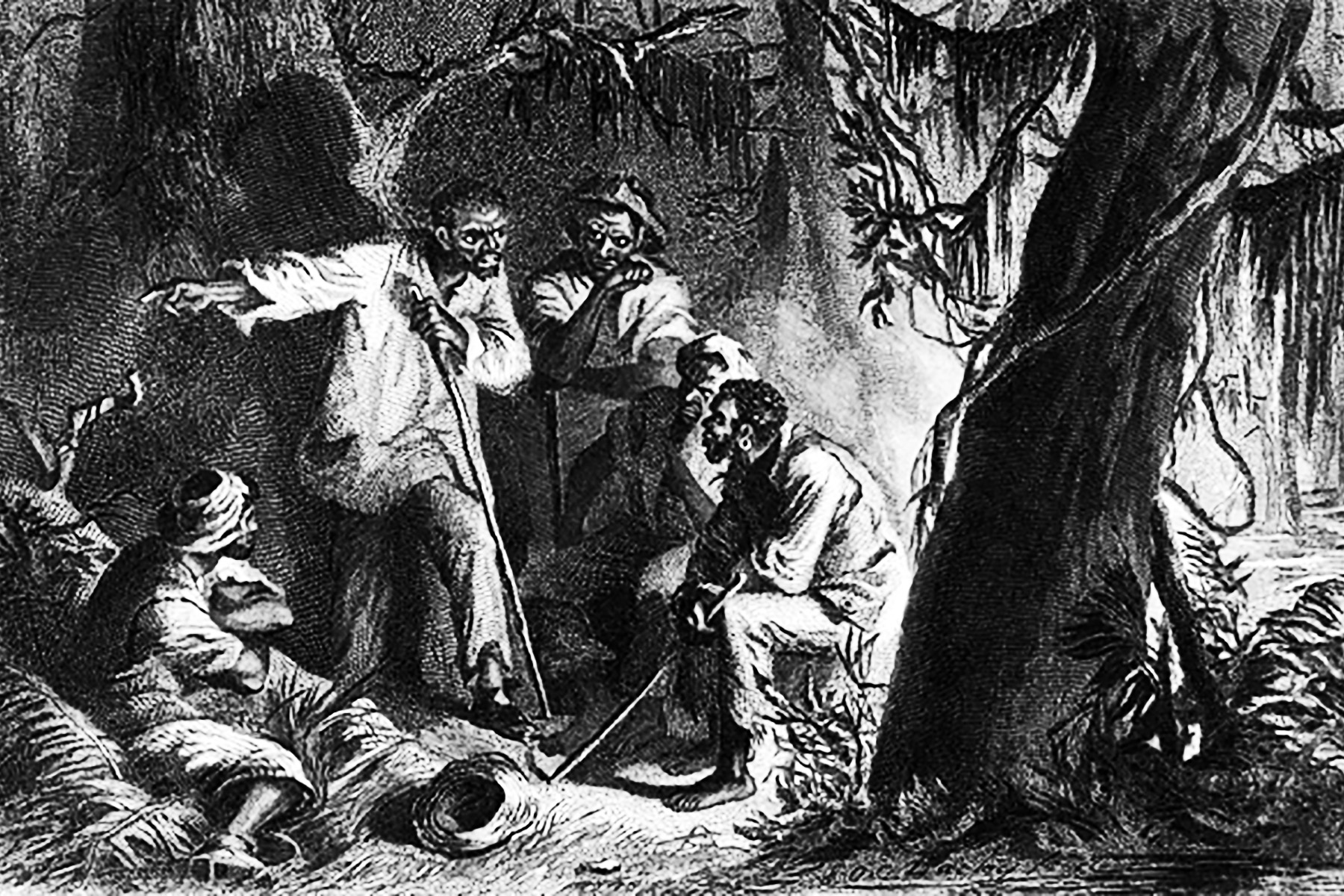 In this blog, Olivia Wyatt – researcher and Harewood volunteer – challenges the ‘facts’ of the archive.

Image: ‘Nat Turner and his confederates in conference’, 1831 published 1863. Whilst this image is not associated with the Tobago conspiracy (1801), it does convey the atmosphere surrounding it.

Power. Whiteness. Resistance. Challenging the ‘facts’ of the archive.

‘The report of the Committee,’ wrote John Robley, Lord Harewood’s attorney for Tobago, ‘I think your Lordship will find highly interesting & satisfactory’. This letter referred to a slave conspiracy in Tobago which was foiled in December 1801. One of the two principal conspirators, Anthony, belonged to the Lascelles-owned Mesopotamia plantation. The committee of which Robley wrote was convened to investigate the conspiracy, and they concluded that a few ‘artful’ individuals intended to lead intoxicated ‘ignorant negroes’ into open rebellion. Whether or not the rebels agreed with this summary of their conspiracy is a mystery; therefore how can we interpret the resistance of enslaved people when we can only conceive of it through the lens of their oppressor?

This is why Michel-Rolph Trouillot wrote of the need to analyse the power behind the process of historical production, which silences some narratives and empowers others. Those who are not considered ‘victors’ are often unable to present their perspectives in the historical material. This helps explain why Orlando Patterson advocated for historians to ‘stop defining slavery through the experiences of slaves’. Rather, slavery should be understood as a system of social death which attempted to use violence to alienate and dehumanise Black people for profit. Examinations of resistance are therefore, perhaps, as Vincent Brown posits, more useful than attempts to reconstruct the condition of slavery. The efforts of enslaved people to reshape their world reveal their politics, their dreams, and their dissatisfaction with their environment. Far from rendering enslaved people as docile and unfeeling, examinations of resistance could give them the voice they were denied. Nonetheless, this task becomes difficult when their resistance is presented through the mediums of their oppressors. I will therefore dissect one of the portrayals of Anthony in the archive, to show that there are ways to look beyond the oppressors’ attempts to further subordinate enslaved people through their control of the narrative. 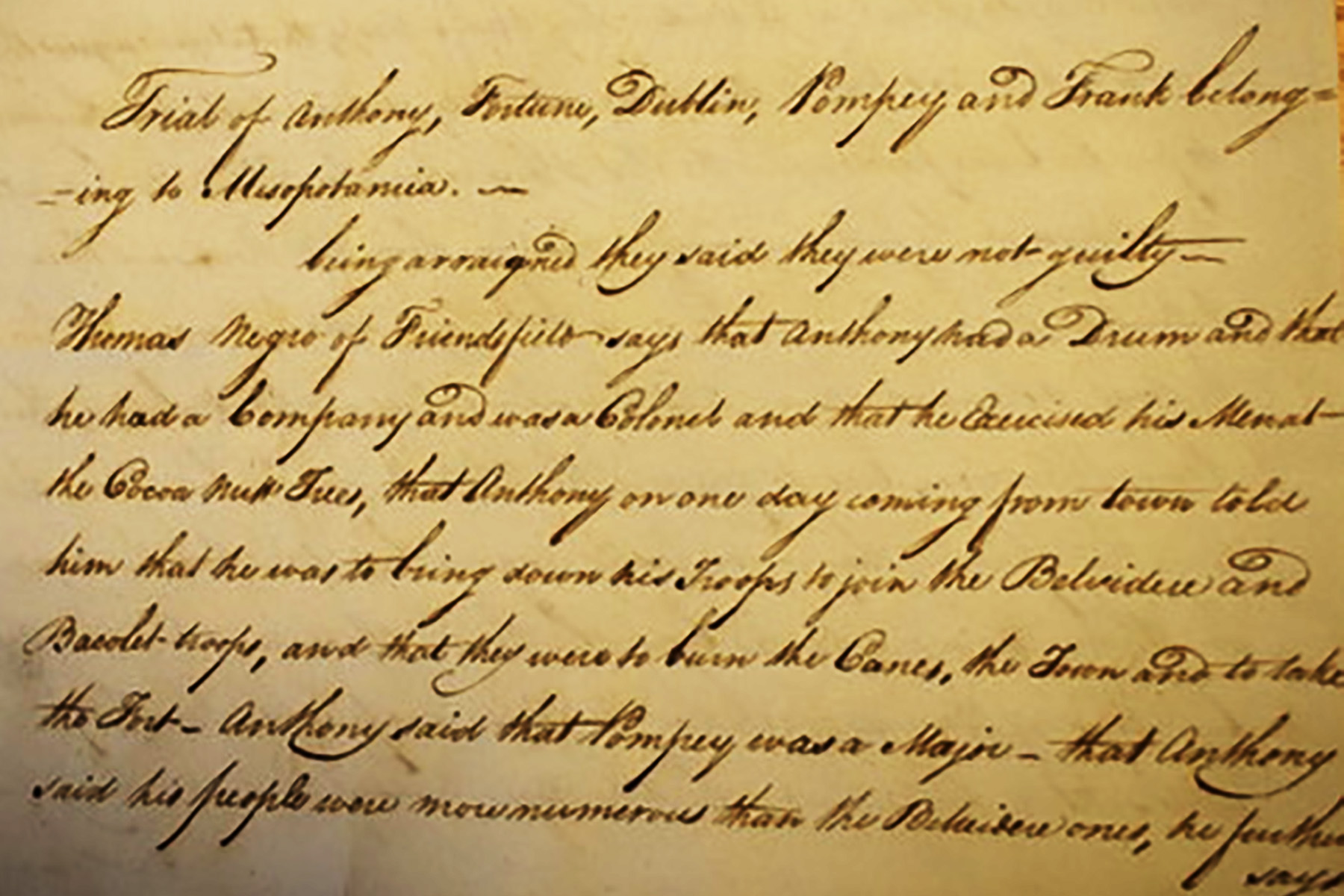 Image of part of the Witness Statements from the Trial of Anthony, Fortune, Dublin, Pompey and Frank belonging to Mesopotamia (1802). Photograph taken by the author.

Nearly 200 Black people and some free-coloureds were arrested and interrogated, and Anthony pleaded not guilty during his trial. According to witness testimonies, the plan was to ‘put to Death all Whites’ but ‘preserve the White Women for their Wives’. This desire to form intimate and legal bonds with White women could suggest that the conspirators glorified Whiteness. The ‘negro’ embodied backwardness; a ‘heathenish’ and ‘dangerous kind of people’, according to the Barbados slave code. Not only was Blackness therefore presented as undesirable and inhuman; but, as Stuart Hall posited, Black people experienced themselves as the ‘Other’. Their being was in conflict with their inclination to conform to the norm and improve their standing through the main medium of power in the Caribbean: Whiteness. Whiteness became a tool of power for many Black people because it enabled them to escape the ‘trappings’ of Blackness. In order to elevate his status, as Frantz Fanon illustrated, the Black man dons a ‘white mask’ and ‘becomes whiter as he renounces his blackness, his jungle’. Marriage to a White woman would improve Anthony’s status, but in a society which was supposed to be rid of White people in order to ensure slavery’s demise, surely Whiteness would no longer possess such power? This could instead reveal how ingrained the desire for Whiteness was. It suggests that Anthony’s resistance to slavery was not necessarily resistance to White supremacy because it still positioned Whiteness as the ideal. Such beliefs fuelled the degradation of Blackness and upheld the racial hierarchy which governed the Caribbean; a hierarchy which, with its intersections with gender, positioned dark-skinned Black women at the bottom. The conspirators’ positioning of White women as the prize for their resistance demonstrates that when Black men resisted oppression, they did not necessarily resist for all.

Yet this is not the only interpretation which can be made. This supposed desire also capitalised on White men’s fears of Black men’s sexuality and the need to protect ‘their’ women and White purity. Could these witness testimonies therefore reflect these fears, instead of the conspirators’ internalised anti-Blackness? Torture and other extreme methods were undoubtedly used to extract information from the prisoners and, as K O Laurence admitted, this could make their accounts suspect. The governing council also declared martial law and the military conducted many of the interrogations. Indeed, the ruthlessness with which the Brigadier managed the situation encouraged the council to demand that the conspirators receive a trial. The objective to kill the White inhabitants often emerged in the testimonies, but the desire to save the White women appeared less so. This could indicate that this desire was confined to the principal conspirators, though it is also plausible that this was a dubious claim. Indeed, the other chief conspirator, Roger of Belvedere, questioned whether he ‘was present when this plan was settled’, presumably because it was unbeknownst to him. Given the conditions under which some witnesses were interrogated, the fact that Roger challenged this claim casts further doubt on the testimonies. If witnesses had been pressured to testify about a threat to White women, this would have further demonised the principal conspirators. Indeed, the council stressed their desire to make examples of only the leaders. The committee’s report was therefore characterised by disdain for the ‘manipulative’ conspirators who were ungrateful for the ‘luxuries of life’ which they had been granted as ‘principle people on the estates’.

We must therefore question the reliability of these testimonies and whether they suit the council’s pre-established agenda. As Saidiya Hartman has done, we must press at the limits of the archive and imagine what could have been in order to challenge what seemingly was. To speculate about which interpretation could be the ‘truth’ is to undermine what I set out to demonstrate. The multiple possibilities of one line in one source allow us to question the power behind the written word. We must also strategise how to exhibit this complexity within museums. The archive alone is not enough to represent marginalised people; though perhaps re-imagination, as evidenced by my second interpretation, is one way forward.